Clarifying Truth in Front of Chinese Consulate in Chicago (Photos)

(Minghui.org) For years, despite rain or snow, Falun Dafa practitioners have been protesting in front of Chinese general consulate in Chicago, requesting that the Chinese Communist Party stop persecuting Falun Gong in China. On May 5, 2012, one week before World Falun Dafa Day (May 13), practitioners came to the same place and continued the truth clarification as normal. 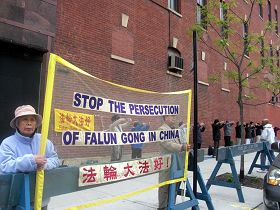 Falun Dafa practitioners continued their truth-clarification effort at the Chinese General Consulate in Chicago on May 5, 2012. 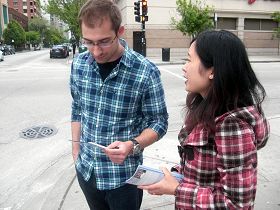 Passerby takes a flier and listens to a practitioner.

The protest started about ten years ago in September 2002, when over a dozen senior practitioners began gathering in front of the Chinese Consulate in Chicago every day. One of them is over 70 years old. They said that practicing Falun Dafa let them regain health and lift their moral standard. But Jiang Zemin started persecuting these honest people in 1999. Many practitioners were killed, and more are jailed in forced labor camp and prisons, and are being tortured. Many of them have relatives in China being persecuted so they can't be indifferent. They wanted to protest for the practitioners in China. “If the persecution lasts one more day, then the protest will continue one more day!” they said.

The people coming to the consulate have changed a lot recently. A young couple from China came out of the consulate and went directly to the practitioners and said, “The people persecuting Falun Gong are very bad!”

One older overseas Chinese has three children who are in America, China and Taiwan. He is in his eighties, yet every year he visits all three children. Once he came out of the consulate and walked to the practitioners. He held one practitioner's hand and said, “Falun Gong is good! Jiang Zemin didn't allow you to practice. That is wrong. The exercise can improve people's health. How can they forbid people from practicing it?” He took some truth-clarification CDs and said he will bring them back to China to share with his relatives and friends.

For years, the protest continued in front of the consulate despite the weather, be it hot, cold, windy, raining, or snow. Some passersby learned about Falun Gong from there. Once a man watched from across the road for a long time. A practitioner gave him a flier and they talked for a long time. He asked the reason for the persecution and the current situation in China. He expressed his respect for Falun Gong practitioners and wished them strength, and to continue their endeavor.

Mr. Sen Yang, president of the Mid-West Falun Dafa Association, said, “The faith is rooted in people's hearts, and you can attempt to take it by force.” He continued, “No matter how long the persecution lasts, we will never give up. More then ten years have passed, and my belief in Truthfulness-Compassion-Forbearance has never changed. Any persecution of religion throughout history had the same outcome. The persecutors died and their bones turned into ash, but the faith continued.”

Since July 1999, when the persecution of Falun Gong started, over 3,000 practitioners are confirmed to have died, and many are still enduring unprecedented evil tortures. Falun Dafa was introduced to the public 20 years ago, and Falun Gong practitioners continue their endeavor to stop the persecution, peacefully and persistently.