(Minghui.org) On May 9, 2012, practitioners from cities in Eastern Canada gathered on Parliament Hill in the capital to celebrate the twentieth anniversary of Falun Dafa's introduction to the public. Seven Canadian MPs and a Senator came in person to make speeches. 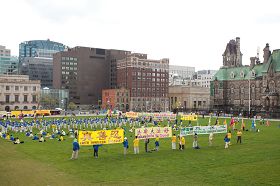 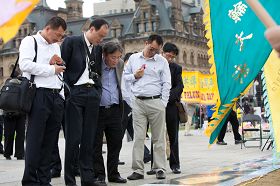 The MPs praised Falun Dafa's Truthfulness-Compassion-Forbearance for its contribution to society, and encouraged practitioners to continue their efforts in peacefully resisting and stopping the persecution. They called upon the Chinese leaders to learn the facts, understand the severity of the persecution, and make a wise choice at this historical moment.

Following the Prime Minister, several ministers and MPs who issued proclamations for Falun Dafa, on the very day of celebration, the mayor of Ottawa also issued a proclamation to the Falun Dafa Association of Canada in recognition of Falun Dafa Day.

Chairman of the Parliamentary Friends of Falun Gong: Falun Gong Benefits Canada and the Whole World 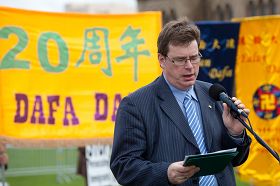 On behalf of the Canadian Parliamentary Friends of Falun Gong composed of thirty MPs and Senators, MP Rathgeber congratulated the twentieth anniversary of Falun Dafa's introduction to the public. He said that in Canada, people enjoy freedom of expression and freedom of conscience. Such freedom is encouraged, and the Falun Gong practitioners' exercise demonstration in front of Parliament Hill proves it.

He encouraged practitioners to continue to uphold their beliefs. He said that he believed that his colleagues, MPs, and senators all believe that the principles of Truthfulness-Compassion-Forbearance, and Falun Gong practitioners' efforts, are positive contributions to the Canadian community. They not only benefit the Canadian people but also the world's people. Therefore, the existence of the Parliamentary Friends of Falun Gong has been a reminder for the Canadian people and government to put an end to the Chinese Communist Party's (CCP) persecution of Falun Gong.

Martin Luther King once said, “Human progress is neither automatic nor inevitable... Every step toward the goal of justice requires sacrifice, suffering, and struggle; the tireless exertions and passionate concern of dedicated individuals.” MP Rathgeber cited these words to encourage Falun Gong practitioners, and remind them that their struggle hasn't been in vain, and to continue their hard work, and their sacrifice, suffering, and struggle will be most worthy.

MP Rob Anders: Falun Gong Has Made it Through a Remarkable Twenty Years 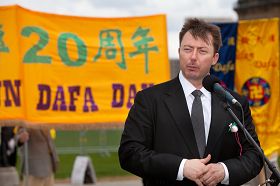 MP Rob Anders said to Falun Gong practitioners in his speech, “Because of your persistence and your forbearance with regard to this... I think you will see success.” He said, “For every single one of us there's probably 100 people, maybe more, who suffer behind the bamboo curtain and are right now in gulags and slave labor camps inside China suffering persecution, beatings, and torture. So for every one of us here it's so important to send a message to them, to let them know that people care, and call evil by its true name.”

Facing the recent changes taking place in China, he believes that China is facing a historic choice. He doesn't think that communism is a natural fit for China. Falun Gong, in terms of its promotion of things that are more intrinsic and more holistic is good for China. He said, “It has been a remarkable twenty years and I wish them well for the next twenty.”

He analyzed the direction of China's future in his speech. He said, “There is change hopefully in China. We hear about struggles. I think the Chinese regime is a brutal repressive, rigid regime. It will come to an end in one of two ways. One, like Nicolae Ceausescu in Romania, for the crimes against humanity. The people who have done these things will be hunted down by those who have been persecuted when regime change happens.”

He continued, “Or they can allow for the voice of moderation, for experimentation with democracy, for easing of the repression, for holding to account those who have been the worst perpetrators in the regime. Something like what happened in Russia, the Soviet Union, with Mikhail Gorbachev and with Borys Yeltsin with perestroika ('restructuring') and glasnost ('openness')”

He said, “If these types of things happen, then China could have a peaceful transition to what it should be. So the real choice for China, is, does it want a future like North Korea, which will end in a very nasty way? Or will the future be like that of Taiwan.”

“I can only hope, and I know you do too, my friends, and all those people who suffer behind the bamboo curtain, that China is making a change for the better and that it will allow for an expression of these people with spiritual practice and freedom of speech, taxpayer rights, and all these types of things that need to come to fruition.” 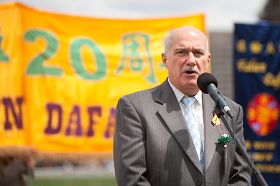 After learning about China's huge change, MP Breitkreuz said in an interview, “It seems like the new leadership that is coming in may be addressing the situation. I think they realize how serious it is, how many lives are being lost, the torture in detention that is taking place is not acceptable, and I really think there is some hope that this will take place.”

He said, “My personal opinion is that we should not allow economic considerations to trump human rights considerations. I think freedom, democracy, and human rights are more important than sometimes a dollar in our pocket. That would be my feeling. And I also think that the people of China themselves feel that way.”

MP Breitkreuz said, “I think speaking the truth can be very, very powerful, so I think we have an obligation, the media has an obligation to cover some of these things. I think we need to support them, and the more we can learn about that unrest, probably the better it is.”

MP Judy Sgro: Human Rights Is a Valued Part of the World 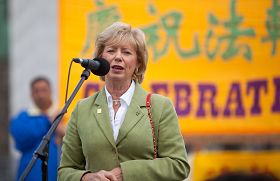 MP Judy Sgro said in her speech, “I believe just looking at all of you here in front of Parliament Hill and throughout Canada that are celebrating this very special day is a tribute to your perseverance in your faith, to your belief in your right to be able to practice Falun Gong, that truly offers all of us in Canada a chance for a spiritual guidance, an opportunity for us to promote peace and equity.”

She said in an interview, “I am just hoping that China [authorities] is recognizing that they need to come into the 21st century. They need to start recognizing human rights as a valued part of the world. And if they really want to be part of this worldwide economy and everything else, they need to be recognizing groups like Falun Gong to be able to come and practice their ability for peaceful messages to go out across the country.”

MP Elizabeth May: I Stand with You 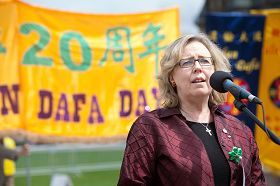 MP Elizabeth May said in her speech, “We all need to know that as we celebrate today, in the bright sunshine which just joined us, on Parliament Hill, free here in Canada to celebrate Falun Dafa, that we share in solidarity the goal that the practitioners of Falun Dafa and Falun Gong in China be as free to practice traditional religious practices, to speak freely, and to be part of a world that recognizes that human rights are fundamental.” “I stand with you in that effort. I share with you in that dream. And we'll all be as one heart to know that humanity is one and respect for each other is essential, or none of us are truly free.”

Senator: Hope to Celebrate Falun Dafa Day with You in Beijing 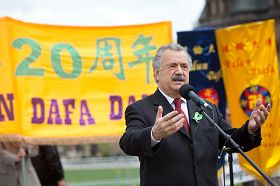 Canadian Senator Consiglio Di Nino, who has been supportive of Falun Gong, is also vice chairman of the Parliamentary Friends of Falun Gong. He said, “First of all, as I just said, this is wonderful when you see so many people who are practicing their spiritual beliefs on the lawns of the Parliament buildings in Canada. That is what democracy is all about.”

After learning about China's huge change, he said he hoped China would make the best of all the choices. He said, “I think what you, and the others around the world that support you, have been doing is starting to pay off.” “What I want to say to all of the practitioners of Falun Dafa, that... they should be striving for the next year or the year after... You want to go and celebrate one of these anniversaries in Beijing and I would like to be there with you when you do it.”

MP Peter Stoffer: Upheaval in China Means Change Is Coming, and Marks a Time for the International Community to Call for Human Rights 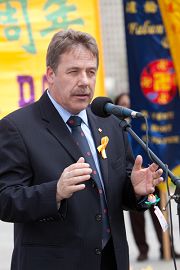 MP Peter Stoffer said he’s hopeful that upheaval in China means that change is coming. He used an apple cart to refer to the Chinese Communist regime. He said, “Obviously with the corruption charges against one of the senior people (Bo Xilai), I think that's unsettled the apple cart a bit there. If someone of that prominence could end up being charged in that regard, it shows you that there are some people within the government that are looking at corruption from a different point of view and saying, 'Come on folks, we can't keep doing this.'”

He said, “The strength of the diversity of a nation is its tolerance and acceptance of other people's faiths and religions. That's what made us strong.” He encouraged the Chinese government, “Don’t be afraid of it. Don't run away from it, don't look at it as a threat, but embrace that change.”

MP Stoffer said that the upheaval marks a time for the international community to call on the Chinese regime to address human rights.

“I honestly think that with the western world, people like Hilary Clinton and our foreign affairs person and everyone else collectively saying to the Chinese government, 'Look, we love doing business with you, we like the trade aspect, but there's a major element missing in our discussion, and that is human rights.'” 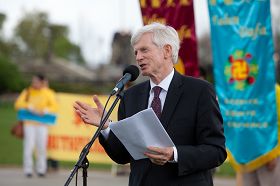 David Kilgour said in his speech, “The twentieth anniversary of the first introduction of Falun Gong concepts to the Chinese people is being celebrated in more than 100 countries. Festivities are to be held across Canada this month.”

He continued, “Falun Gong has received wide recognition, including awards and proclamations. It has been honored by officials across Canada, including Ottawa mayors, who have proclaimed May 13 as Falun Dafa Day here during the past decade.”

“While an inhuman party-state-led persecution has continued for thirteen years across China, Falun Gong spread across much of the democratic world. The treatment of Falun Gong by Beijing [Chinese Communist regime] since mid-1999 has overall been even worse than the persecution of other religions and cultural minorities in China.”

David Kilgour concluded, “Beijing is currently making major political changes in its senior personnel. Those appointed should seek dignity for all Chinese if they wish to achieve sustainable prosperity... If the party-state ends its violations of human dignity at home and internationally, and begins to treat all members of the human family in a transparent and equitable way, the new century can bring harmony for China and the world.” 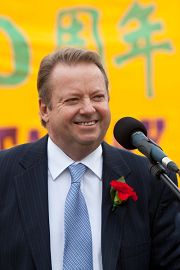 MP Jay Aspin comes in person to express his congratulations 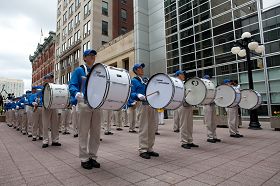 The Divine Land Marching Band marches in downtown Ottawa, the capital of Canada

After the rally, practitioners presented artistic performances to celebrate Falun Dafa Day. The Divine Land Marching Band, composed of more than 130 practitioners, performed pieces including “Falun Dafa Is Good,” and the resounding music echoed in the sky. Western practitioners sang a song composed by themselves to express their joy of obtaining the Fa and their gratitude to Master and Falun Dafa. Several young practitioners performed dance and martial arts, attracting many passersby who stopped to watch.