Seattle: Celebrating the 20th Anniversary of the Founding of Falun Dafa and Its Wide Spread Around the World (Photos)

(Minghui.org) In celebration of the 20th anniversary of the founding of Falun Dafa, Falun Dafa practitioners from the greater Seattle area gathered at Westlake Park in downtown Seattle on May 5, 2012. They demonstrated the beauty of Falun Dafa to the passersby and expressed their gratitude to Master Li Hongzhi, the founder of Falun Dafa. The activity also provided an opportunity for more people to learn about the unlawful persecution of Falun Dafa in China. 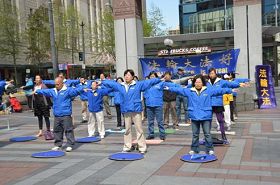 Shen Yan is a civil engineering Ph.D. candidate at the University of Washington. She began practicing Falun Gong in 2008 after she came to the US. She talked about her amazing experience. “Before I practiced Falun Gong, on average, I caught a cold every month. In the past four years of my practice, I wasn’t sick even once. I've also learned how to look at things from the other person’s viewpoint when conflicts arise. I then look within, trying to find out what I did wrong. From Falun Dafa's teachings, I've learned to think 'outside the box.'”

Western practitioner Diana Benedetti was very happy to be there and do the exercises with other practitioners. “I hope to let more people know about Falun Dafa and to learn it. The energy field generated during exercising makes me feel wonderful. My life has been much happier after I learned Falun Dafa because I have eliminated many bad things, bad attachments, and bad habits,” said Diana. 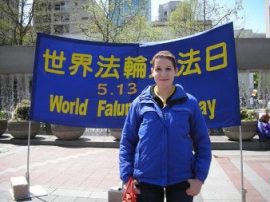 Ten-year-old Zhen Zhen likes Falun Dafa because “I get to become healthier and I am doing better at school.” The practitioners displayed posters to introduce Falun Dafa and expose the facts of the brutal suppression in China. There was a table with a variety of fliers and pamphlets about Falun Dafa. Many passersby read the posters and asked for more information. Some signed the petition to support an immediate end to the persecution in China.

Passersby read the posters, take fliers, and sign a petition to help stop the persecution

Roger from China stood in front of the posters for a long time. He said that he knew that Falun Gong was good when he was in China. He wished more people could have the means to break through the “Great Firewall” (the Chinese Communist Party's Internet blockade) and learn more about Falun Gong and the brutal persecution in China.

Architect Kurt Anderson spoke with a practitioner for a long time. He wanted to let people in China know that the American people support them. “I think most Americans have understood the persecution of human rights in China and we support the Chinese people. I hope the international community will put enough pressure on the Chinese government, which will eventually help the Chinese people,” said Anderson. 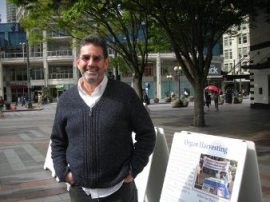 Danny Kiys said that he felt sorry for those who were being persecuted. “I do not want to see something like removing organs from living Falun Gong practitioners happen. I have never heard of it before and this is horrifying. I feel very sorry for the victims.”

Mary Crymes wished that the media in the US would expose more of China’s persecution of human rights. “The Chinese Communist Party controls people’s minds and profits from selling illegally-obtained organs from living people. That is inhuman. The US government should report more on the issue; otherwise, there will be more people being killed [in China].”

Ardy Kohao learned that Falun Dafa practitioners imprisoned in forced labor camps in China are forced to do intensive labor, making products for export, under terrible working conditions for long hours. These products are sold internationally. “To support Falun Gong, we need to know what items are made in Chinese labor camps and not buy them. That way, the money will not go to the criminals and the authorities. This is a conscientious choice.”