(Minghui.org) From March 25 to April 1, 2012, the 25th World Team Table Tennis Championships were held in Dortmund, Germany. Falun Dafa practitioners from Nordrhein-Westfalun, Germany, took the opportunity to clarify the truth to athletes, local residents, and tourists. 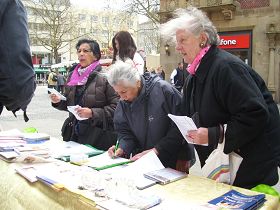 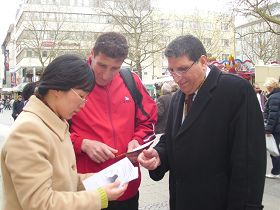 In Germany, Dortmund is known for sports. This is the third time Dortmund has hosted the World Table Tennis Championships. This year about 60,000 participants from over 140 countries participated. On March 29, the practitioners held an information-day event on the pedestrian street in downtown to clarify the facts and collect signatures for a petition to condemn and stop the Chinese Communist Party's harvesting of organs from living Falun Gong practitioners in China.

Ms. Yang, the event organizer, said, “China is number one in the world in table tennis, but many people don't know that China is also 'number one in the world' for committing a huge crime: taking organs from living Falun Gong practitioners to sell at great profit to transplant patients. The Chinese Communist Party is behind this horrendous outrage.

“Just think about it: the tissue matching process is crucial in organ transplant operations. In Western countries, the waiting time for a matching kidney can be half a year or longer. But a transplant center in Shenyang City, China, claimed their waiting period is only one week to one month for a kidney and no more than two months for a liver. How can they promise such a short wait time? There is only one answer: they must maintain a large pool of organs. One witness once told a foreign media representative that there were over 6000 Falun Gong practitioners jailed in a secret concentration camp in Sujiatun in Shenyang City, and some of them were murdered to harvest their organs.

“A senior military doctor revealed that there are a total of 36 similar concentration camps in China.”

One German woman said she liked Chinese culture so much that she dyed her hair black. She was very upset to learn about organ harvesting in China and asked for more details. A practitioner told her that those crimes were being carried out in secret. Falun Gong practitioners were forced get blood and tissue tests in the jail. And the judicial system worked with the hospitals to sell their organs for profit.

One gentleman knew about the bad things happening in China but felt frustrated in his understanding of the issue. A practitioner told him that this was not about politics but to save lives. They talked about the principle that good deeds will be rewarded and evil deeds punished. He listened carefully and his attitude became more and more friendly.

Another German said he believed everything is given to us by the God and that one should pay attention to one's internal thoughts. He supported Falun Gong and signed the petition form.

Wienz, a young German lad, offered his opinion that the signatures would probably not have any effect on the Chinese Communist Party. A practitioner told him that the signatures would be presented to the Health Ministry of Germany to initiate a new bill “to encourage Germans not to go to China for organ transplantation.” As Wienz flipped through the pages of signatures, the practitioner continued, “This also expresses our conviction that we must stop this evil. If all righteous minds work together, the power will be a great.” Wienz signed his name and address.

Brandt signed her name. Beside her, her little daughter wanted her mother help her to write down their address but she wanted to sign herself. Later, when they learned that, during the persecution of Falun Gong, many people who believe in Truthfulness-Compassion-Forbearance were murdered, leaving behind orphaned children, the two expressed their shock and blessed the practitioners.

When the owner of a sporting goods store learned the facts, he posted a Falun Gong flyer at his store entrance so everyone could see it.

Another practitioner told a reporter, “These days I meet a lot of people from different countries: Thais, Taiwanese, Africans, media workers from Japan, reporters from China, and table tennis fans from China and Morocco. I've told them that, besides table tennis, China has another exercise that is world famous: Falun Gong. Once, over 70 million were practicing it in China, and now it has been embraced in over 100 countries and regions throughout the world. They are glad to hear this and take the flyers.”

During the championship, many people from different countries learned the truth about Falun Gong from practitioners.