(Minghui.org) German Falun Gong practitioners held an information day in Heidelberg, southern Germany, on the afternoon of April 27, 2012 to commemorate the 13th anniversary of the peaceful April 25th appeal in Beijing. They explained the facts about Falun Gong, and called for an end to the persecution in China. 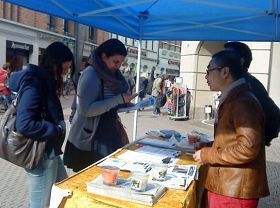 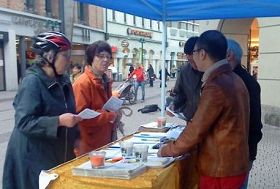 Learning about Falun Dafa and the persecution 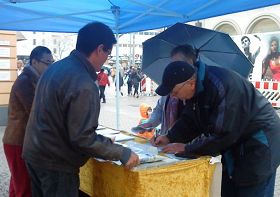 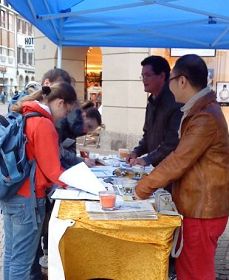 On the pedestrian streets of downtown Heidelberg, Falun Gong practitioners told passersby about the April 25 appeal and exposed the brutal persecution of the practice in China. Many people signed the petition to stop the persecution.

One gentleman indicated that while in Cologne, he had seen an information day held by Falun Gong practitioners and received a leaflet. Today he asked a practitioner for another leaflet to pass on to his friend to read.

Another gentleman said that he used to live in another city and had come across Falun Gong. When he met the practitioners again that day, he immediately inquired where and when he could learn Falun Gong in Heidelberg.

A student and his mother also passed by the information table. The mother, after reading the leaflet, signed the petition right away. The student asked the practitioner whether he, a 14-year-old, could sign the petition. After he received an affirmative response, he also signed it.

A local practitioner said that many people had already heard of Falun Gong on TV, on the radio or in newspapers. Practitioners only needed to say a few sentences, and many people would sign the petition immediately.

Heidelberg is located in the state of Baden-Württemberg, in southern Germany. It is a famous historical and cultural city. Not only does it have the oldest university in Germany—Heidelberg University—but the city is also famous for its beautiful landscapes. According to the latest statistics published by the German Tourist Center (Deutschen Zentrale für Tourismus), Heidelberg’s castle is the most popular tourist attraction for foreign travellers to Germany.