(Minghui.org) About 40 policemen, including all officers from Nanxing Police Station and some from Guanghan City, illegally arrested Falun Gong practitioners in Nanxing Township on March 28, 2012. They were led by Mao Li, the deputy director of the Guanghan City 610 Office.

Around 10:00 a.m. that day, the officers surrounded a tea house next to the Agriculture Bank. The tea house is located on a narrow street about 4 meters wide, with a line of grocery vendors on the street. Some of the policemen were in uniform, and some were in plainclothes. They divided into two groups and blocked both ends of the street, before they started to make the arrests.

When they arrested Yang Rui, in his 30s, from Nanxing Township, Yang resisted and shouted, “The police are arresting (innocent) people!” When Yang refused to go, 7-8 policemen grabbed hold of him, some kicking him, and brought him to Nanxing Township Police Station. When officers handled Luo Shizhao from Guangxing Township, Luo asked why she was being arrested. The police refused to answer and dragged her away. Some bystanders who saw the police using violence said, “[Don't do that.] You just need to ask her to go with you.” The police replied, “If you say this again, you will also be arrested.”

The police also ransacked the homes of the arrested practitioners. The police took away everything related to Falun Gong and each officer either refused to sign an itemized list of confiscated materials or their signatures were illegible. When they searched the home of Chen Jianhua, Chen's family asked the police to show their IDs. The family warned the police that their actions were illegal and they would sue the police. The police responded, ”Go ahead and sue us.”

According to local residents, a few days before the arrests, there were plainclothes police officers with mini video cameras recording Falun Gong practitioners in the tea house.

The Detention Notification received by Chen Jianhua's family was illegal. It stated that Chen had violated the Crime Law Article 300; however, Article 300 does not mention Falun Gong at all. There was no name of the staff member in charge of the case and no date.

Known personnel responsible for the arrests: 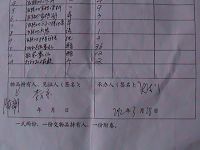 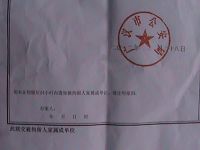 Picture of the Detention Notification

“Clarifying the Truth to Remove Interference: The Art of Zhen, Shan, Ren Exhibition a Success in Russia ”

“Raising One’s Level with a Righteous Mind and Eliminating Attachments ”