(Minghui.org) Toronto, Canada celebrated the annual Easter holiday with a parade near Ontario Lake on April 8, 2012. The dazzling floats and cheerful music attracted tens of thousands of spectators. The Falun Dafa entry included the Tianguo (Divine Land) Marching Band, a waist drum team and a Fa Boat, which attracted the attention of many spectators. 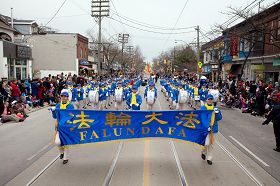 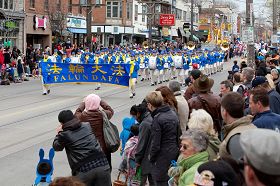 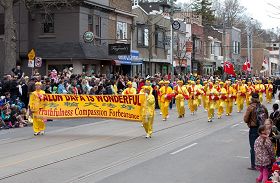 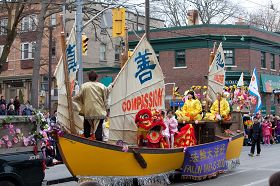 It was drizzling and a bit chilly but the parade participants and the spectators were enthusiastic and excited. People waved and shouted “Happy Easter” to one another and Mayor Rob Ford came to give out candies and his holiday blessing.

The Tianguo Marching Band was made up of 80 Falun Gong practitioners. Their bright costume and majestic melodies became an eye-catching scene in the parade. This is the fifth consecutive year that Tianguo has been invited to the parade.

The parade participants were mostly westerners, but a group of Chinese dressed in golden traditional Chinese costumes formed a bright contrast. These were members of a waist drum team and this was the first time they had come to the Easter Parade. The troupe beat their drums with bright smiles and vigorous energy while the crowd cheered.

The captain of the waist drum team, Ms. Gao said, “Waist Drumming is a traditional Chinese folk art and it is used in festivals. Easter symbolizes the resurrection of God and we are very happy to participate and show the western society Chinese traditions and elegant demeanor.” 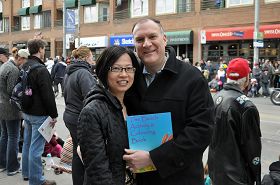 Ross Saturnel from Toronto came to watch the parade with his wife. Mr. Saturnel liked the waist drums and said, “It is very appealing and you can’t miss it. It is about spiritual beliefs and is very impressive.” He also liked the bright costumes of the members of the Tianguo Band and their music.

His wife, Ms. Lin, was surprised to see a group made up of Chinese people. She really enjoyed the performance of the waist drums. “It’s nice, I would like to be able to do that too.”

“I like the golden color of their costumes. All of the members, young and aged, did a great job. The marching band is awesome too.” Sydney was also interested in learning about Falun Gong. 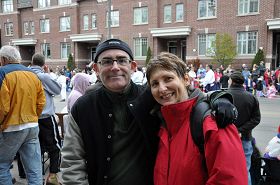 Steve and Elizabeth Roberts admire the performance of the Tianguo Band.

Steve and Elizabeth Roberts drove from north Toronto to watch the parade. Elizabeth enjoyed the Tianguo Band’s performance, “I really like it. The costumes and the colors are great-looking and we are very happy that they came here to perform.” Robert used to play in a marching band. He was glad to see a large marching band in the parade, “Their movements are synchronized and the performance is precise.”

Mr. Dong and Ms. Lin from Etobicoke brought their child to watch the Easter parade for the first time. Ms. Lin was also impressed with the Tianguo Band and the Falun Dafa Fa Boat. She thought the float was beautiful.

“People in Sala, Slovakia, Sign Petition Against Persecution of Falun Gong in China”

“It Is Inevitable that Zhou Yongkang Will Be Brought to Justice”