(Clearwisdom.net) The Chinese Communist Party (CCP) uses the most despicable means to persecute Falun Gong practitioners. One torture method, which a practitioner witnessed personally, was even more brutal than the tiger bench.

In 2002 when I was illegally detained in the seventh squadron of the Nanmusi Forced Labor Camp, I witnessed a guard using a brutal torture method with which he intended to destroy practitioners' wills.

The guard selected 24 drug traffickers and equally divided them into six teams. The first team dragged a practitioner around on uneven ground that was covered with stones, rocks, and broken tiles. The next team continued the relay until all six teams got very tired and were out of breath. I am a practitioner who has also been subjected to this torture method.

Practitioner Ms. Zhu Xia (祝霞) was injured badly, because she wearing thin clothes. The skin on her back, waist, legs, and feet was torn open. These areas were covered with blood, and she later suffered a mental collapse after further persecution in a brainwashing center. 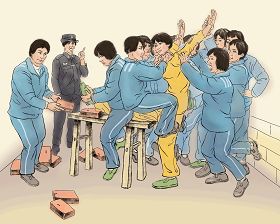 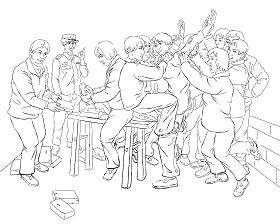 I also witnessed the torture of another practitioner, who, after being dragged for quite some time, was put on a waist-high stool with one of her legs on the ground and the other one raised. One inmate sat on her thigh and the other on her lower leg. The one on her thigh choked her neck with both hands, and the other one held her ankle. Eight inmates held her leg, which was on the ground. She was sandwiched, as if between two pieces of plywood. Eight other inmates pulled her arms behind her back and then upward toward her head, and the remaining six inmates forcibly raised her leg and added bricks. One can imagine that her legs and arms would have been severely injured were it not for the fact that she is a Falun Gong practitioner with strong righteous thoughts and perseverance! Thus, she survived this cruel treatment.

This was a very cruel means of torture, whereas with the tiger bench, the victim's legs are raised and the body is anchored flat. This torture method has not yet been named.

“We Must Be Thorough When We Clarify the Truth”