(Clearwisdom.net) From February 17 to March 6, the Truthfulness, Compassion, Forbearance Art Exhibition was shown in Warsaw, jointly hosted by the Association of Free Speech and the Falun Dafa Association. On February 16, the organizers held an opening ceremony. Andrezej Marzec and Huang from the Falun Dafa Association, Wojciech Borowik from the Association of Free Speech, and Marcel Burdelski from the East Asian Study Center at the University of Gdansk gave speeches at the ceremony. National television station TVP and Polskie Radio covered the story. 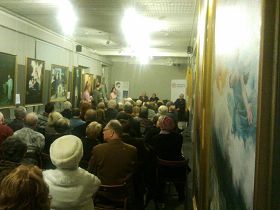 People view the artworks on the first day of the exhibition 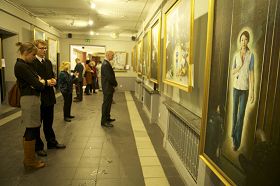 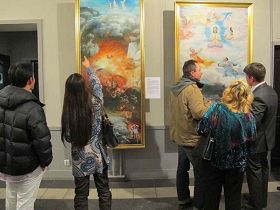 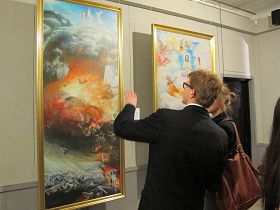 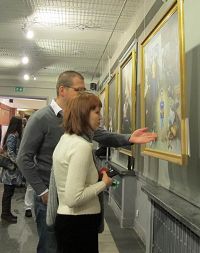 Visitors taking in the artworks

The exhibition was originally to have been held at the History Museum in Warsaw. However, right before the opening, after all the artworks were hung, the curator of the museum received a phone call from an officer at the Chinese Embassy in Warsaw who pressured the museum to cancel the exhibition. The Falun Dafa Association exposed this incident publicly. The people of Warsaw criticized the Chinese Embassy, and many associations and exhibition halls expressed their willingness to hold the exhibition. At the opening ceremony, the president of the Association of Free Speech, Wojciech Borowik, said that it is hard to believe that a phone call from a foreign country could manipulate an art museum in Poland, a free country. He remarked that the contents of the artworks cannot be described in any words, and said that they showed how people in China have no human right under the Chinese Communist Party.

Due to the Chinese Embassy's phone call, many more people heard about the exhibition, and many people came to see it. There were so many visitors that the organizers had to extend the closing time of the exhibition from 5 p.m. to 8 p.m. Monday through Thursday, and they added five more days to the original schedule.

Many local artists had high praise for the artworks. Karol Pudowski, an artist and educator, believes that the exhibition is necessary and that more people should come see it. 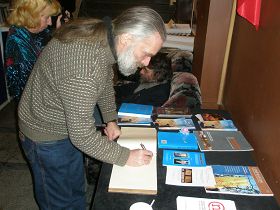 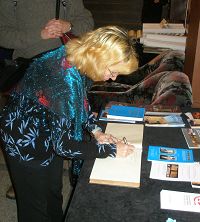 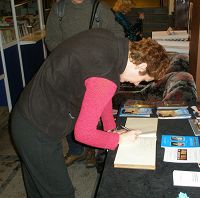 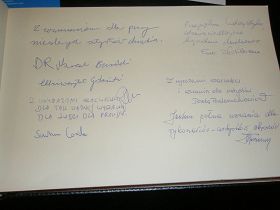 Professor Edward Szymanski praised the artworks and thanked the artists for manifesting the brutality of the persecution. “God bless them,” he said. He that said the crimes shown in the paintings cannot be expressed in human language.

A Chinese gentleman said, “I always wanted to learn about Falun Gong in China, but I couldn't find the truth there. Today, I realize that Falun Gong practitioners have suffered a lot only because they don't want to give up their belief. The paintings are really touching. I want to practice Falun Gong too.”

Another Chinese gentleman bought the artwork “After the parade.” He said, “The painting brings me peacefulness. I will hang it up in my house. I am not afraid of the communist party. I will also read Zhuan Falun.”

A Chinese woman stood in front of a painting for a long time. She said, “This is from the divine. God has truly come to us.”

“New Practitioner: Cultivating Xinxing at All Times Benefits Oneself and Others”