(Clearwisdom.net) ﻿Falun Gong practitioner Mr. Chen Deguang was illegally arrested in July 2011. He was interrogated by torture during his detention. Mr. Chen filed a complaint against the police for the violence and torture inflicted on him. However, the Chinese Communist Party's (CCP) judiciary system has completely ignored his claim, and authorities still seek to put him on trial. 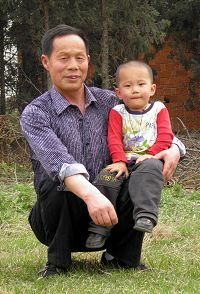 Mr. Chen Deguang with his grandson

On July 6, 2011, Mr. Chen distributed Shen Yun Performing Arts DVDs in the town of Huazhuang in Honggu District of Lanzhou to give people the opportunity to see a beautiful performance full of traditional Chinese culture and to clarify the facts about the lies that the CCP has continually propagated about Falun Gong over the past 12-plus years. As a result, Mr. Chen was arrested and taken to the Honggu Police Station, where officer Zhang Guowei interrogated him using torture.

The police colluded with the Procuratorate and the court to put Mr. Chen on trial. However, the Lanzhou Procuratorate returned the case to the Honggu Police Station, seeking additional evidence.

In November 2011, Mr. Chen filed a complaint, in which he described in detail how Zhang Guowei “collected evidence using violence.”

Mr. Chen’s legs were bruised and swollen, and remained swollen for more than 3 months. Even now, there are still red and purple bulges on his legs, which hurt and itch.

The police transferred Mr. Chen to the Lanzhou Second Detention Center in December 2011. The Procuratorate has completely ignored his complaint and still intends to prosecute and sentence him. Mr. Chen’s family has sought a lawyer to defend him.

Mr. Chen worked at the Northwest Branch of the No. 4 Metallurgical Construction Company of China (now bankrupt). Prior to practicing Falun Gong, he suffered from back muscle strain, cervical bone hyperplasia, gastroptosis, and other diseases. He also smoked two packs of cigarettes a day and drank heavily. On August 16, 1997, Mr. Chen saw the video of Mr. Li Hongzhi (the founder of Falun Gong) teaching in Dalian City and decided to learn the practice. Afterward, all of his diseases disappeared and he quit smoking and drinking.

During the 12-plus years of the CCP’s persecution of Falun Gong, Mr. Chen and his wife, Ms. Sheng Chunmei, have been arrested and detained many times for continuing to practice and clarify the facts about the persecution to people. Both were detained in forced labor camps in 2001. At the Pingantai Forced Labor Camp, Mr. Chen was often cursed at and beaten by prisoners. He was also forced to do high-intensity labor.

In June 2001, labor camp guards Hu Xiangxian and Wang Changshou handcuffed Mr. Chen behind his back and hung him up, with only his toes touching the floor. They then covered him with two cotton quilts. Mr. Chen’s entire body trembled, and sweat poured off him. As a result of this torture, he felt very weak, experienced chest pain, and had difficulty breathing. He also could not straighten his back.