(Clearwisdom.net) Today's News from China includes incidents of persecution that took place in 12 cities or counties in 10 provinces. In this report, 19 practitioners were subjected to mistreatment during their detention, and at least 13 practitioners were illegally arrested. 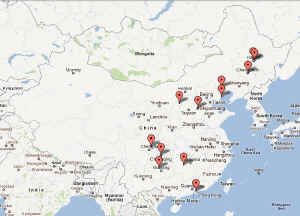 On the afternoon of November 24, 2011, Mr. Liu Xinhua was arrested while he was clarifying the facts about Falun Gong. He was taken to Weizigou Prison and illegally sentenced to one year of forced labor.

On the morning of December 6, 2011, Mr. Liu Pengyun from Shiren Town, Hulan District, Harbin was arrested for reading Falun Dafa books at home. He was taken to the Hulan Detention Center.

On the afternoon of December 7, 2011, officers from the Jiankang Road Police Station in Xiangfang District and from the Domestic Security Division of the Xiangfang District Police Department arrested Mr. Liu Shouxin, 78, and Ms. Guo Shuhui, 71. The police confiscated several personal items, including at least one computer. The condition of Mr. Liu and Ms. Guo is not known.

On the morning of December 6, 2011, Ms. Li Shuzhen from the Yanshan Residential Community was arrested while talking to people about Falun Gong. She is being held at the Qinhuangdao No. 2 Administrative Detention Center.

On November 26, 2011, seven officers from the 610 Office of the Domestic Security Division in the Yulin area, along with officers from the provincial public security and state security offices, broke into the dental clinic operated by Mr. Liu Zhongxiang. They arrested him, and then confiscated a computer and medical accounting ledgers. Mr. Liu's whereabouts are unknown.

7. [Hebei Province] Persecution of Falun Gong Practitioners in the No. 3 Division

In November 2011, Ms. Wang Shulian was held in solitary confinement for singing Falun Dafa songs. The division head viciously beat her, stepping on her hair in the process. Ms. Wang sustained injuries all over her body.

On November 24, Liu Ziwei, No. 3 Division head, ordered practitioners to take off their cotton overcoats and shoes and stand in the courtyard in the cold.

On December 7, 2011, Ms. Jiang, in her seventies, and Ms. Cai, in her sixties, from Hedong Town in Deyang, were arrested while they were explaining the facts about Falun Gong in Jingyang District and Xinshanli. The two practitioners were taken to Zhongjiang County in Deyang.

10. [Chongqing] Supplemental Information on the Arrest of Ms. Tang Tianzhen and Her Husband Mr. Mi Jialong

At the end of October 2011, Ms. Tang Tianzhen and her husband Mr. Mi Jialong, who live in the Shiqiaopu area in the New High Tech District in Chongqing, were arrested by officers from Beibei District. The two practitioners are being held at the Beibei Party School Brainwashing Center.

On the morning of December 4, 2011, Mr. Liu Zongmin from Qianxi County, Guizhou Province was arrested in the Shanshuiqiancheng residential community in the Xiaohe area in Guiyang. Police took him back to Qianxi County. On the morning of December 5, he was taken to the Lannigou Brainwashing Center in Jinzhu Town, Guiyang and subjected to persecution.

On December 6, 2011, Ms. Duan Saihua, a Lengshuijiang resident, was distributing truth clarification DVDs. Yan Xiqiu, director of the 610 Office, observed her activities and subsequently, Ms. Duan was taken to the Domestic Security Division. She was released after officials extorted 50,000 yuan (nearly $8,000 USD) from her.

“Validating the Fa and Breaking Through Economic Persecution”