(Clearwisdom.net) Shouts of “Guo Jinlong, you've been sued. Stop the persecution of Falun Gong!” resounded in the departures area of Taoyuan Airport, Taiwan, at 8 a.m. on February 21, 2012. Guo Jinlong, the mayor of Beijing, and his delegation entered the airport in a hurry. Many mainland Chinese tourists in the departures area knew that the Beijing mayor had been sued. Some tourists said to Falun Gong practitioners on site, “We heard the shouts: 'Falun Dafa is great.'”

Guo Jinlong arrived at the airport around 8 a.m. and appeared tired. He had a forced smile for the Taiwanese officer who saw him off at the airport. The correspondent asked him, “What did you think when you received the lawsuit documents from Falun Gong practitioners in your hotel?” He did not reply and left towards the exit under the urging of security personnel. He spent less than 30 seconds in the departures area, from stepping out of his car to exiting towards his gate.

As soon as Guo Jinlong entered the airport, dozens of Falun Gong practitioners shouted together, “Guo Jinlong, you've been sued. Stop the persecution of Falun Gong!” The sound was so loud and powerful that the noisy hall became otherwise quiet. 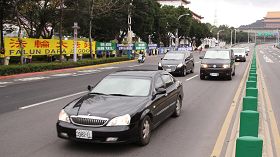 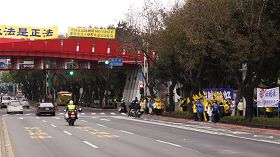 On the morning of February 19, Guo Jinlong and his delegation visited a primary school in Taichung. Police were nervous and walked among Falun Gong practitioners. Once they realized the practitioners’ appeal was peaceful and after hearing about the brutal persecution in China, they instead wanted to help.

At 2:30 p.m., Guo’s car went to Lin’s Garden. When Guo's car left again at 4 p.m., the driver took the side entrance in a hurry to keep Guo from seeing the Falun Gong practitioners.

On the evening, several practitioners stood along the road from Nantou County to Sun Moon Lake. Guo’s motorcade left in a hurry and did not stop. Passers-by gave a thumbs up to encourage the practitioners.

Guo Jinlong had come to participate in Beijing Culture Week in Taiwan. He has been sued for his participation in the persecution of Falun Gong in China. During the 2008 Olympics in Beijing, he ordered the arrest of more than 500 Falun Gong practitioners, violating their freedom of belief and instigating hatred. On the morning of February 16, Chang Ching-hsi, Director of the Taiwan Falun Dafa Association, accompanied by lawyer Teresa Chu, went to the High Prosecutor’s Office and filed a lawsuit against Guo Jinlong for his crimes of genocide and the violation of two conventions. Director Chang asked the prosecutor to arrest Guo and initiate an investigation.