(Clearwisdom.net) Mr. Wu Shihai was a teacher at the Zhaojue County Ethnic Middle School in Sichuan Province. By following the teachings of Falun Dafa, he disciplined himself to be a better person and was very responsible for his work. However, Chinese Communist Party (CCP) officials sent him to the Deyang Prison, where he was brutally tortured. He was detained there from 2005 to 2009.

Wu is now nearly blind in both eyes and unable to take care of himself. All of his toenails were pulled off during torture at the prison. His ears became deformed and were bloody from beatings. The blood hardened and dark-red swelling ensued. He also lost two front teeth due to the torture, and bruises were present on his lips and head. 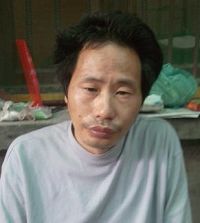 Because Mr. Wu told his students the facts about Falun Gong, Zhaojue County 610 Office agents arrested him and ransacked his home. He was sent to a hospital for emergency care after being abused during the arrest process. Zhaojue Court officials sentenced him soon afterwards and sent him to Deyang Prison.

Mr. Wu was severely beaten at the prison's Second Division. Severe bruising resulted, and the beatings made walking difficult for him and left him unable to speak. Guards dragged him in and out of the cell. They sometimes lifted him up high and then dropped him onto the floor. In addition, the guards instructed inmates to beat him, and often deprived him of sleep and food. He was handcuffed, shackled, and detained in solitary confinement, with little clothing or bedding. He had to sleep on the floor, even during the freezing winter. Regardless of the season, he was dragged outside every night at 2:00 a.m. and doused with cold water. Thugs sometimes dragged him to the washing room and pushed his head into the water tank. He was also forced to stand for a long time without sleep. Whenever he closed his eyes, thugs beat him with bamboo sticks, often causing his head to bleed. In addition, thugs often poked their fingers into his eyes, which damaged his eyes and caused him to become nearly blind. These tortures resulted in Mr. Wu becoming mentally unstable.

Mr. Wu was beaten again at 1:00 p.m. on July 12, 2006. Inmate Zhang Tao hit his head with a wooden stool, knocking out two of his teeth. His mouth and lower jaw were also injured, and he needed twenty stitches at the hospital.

Division 2 head Zeng Guifu and deputy head Ma Chengde were responsible for the beating. Mr. Wu was transferred to Division 10 in November 2006, and the beatings continued after the transfer. The thugs in that area included death-penalty prisoners Song Wenchao, Meng Zhaofu, and others.

When Mr. Wu returned home in 2009, he was extremely dizzy and slept for more than ten days before he was able to get out of bed and eat. His father was in tears after seeing him in this state.

During the time between July 1999 and August 2004, several officials instructed Zhang Lifei, the CCP Party head of Mr. Wu's employer, to mistreat him. The officials included Wu Jinping (deputy Party head of Zhaojue County, deputy Party head Wu Jinping, Judicial Bureau head Yang Tongcai, and Domestic Security Division official Tian Maoqi. Wu's salary was withheld, and he received no pay whatsoever. Instead, all the expenses of his persecution were taken from his salary.

Tian Maoqi and other officials interrogated Mr. Wu on July 20, 1999. They watched him around the clock and did not allow him to teach. When he went to Beijing to appeal in October 1999, he was arrested and sent back to the county Domestic Security Division, where he was tortured and detained for 49 days. He was also forced to pay 5,000 yuan. After his release on December 7, school officials appointed someone to watch him and paid that monitor ten yuan per day, with the money coming from Wu's salary.

Zhaojue 610 Office agents sentenced Mr. Wu on August 14, 2000 to one year of forced labor, and sent him to the Xinhua Forced Labor Camp in Sichuan Province. He was ordered to stand still from morning until 2:00 a.m. daily, and sometimes for the entire night. In addition, guards tied him up with rope, shocked him with electric batons, and force-fed him. His detention was extended by four months. He was released on December 16, 2001.

Mr. Wu was sent to the Xinhua Forced Labor Camp again on January 15, 2003, to serve a two-year term. He was forced to stand and squat, along with standing still, for long periods of time. After various tortures, labor camp officials sent him to Mianyang City Third Hospital - a mental hospital - and forcibly injected him with nerve-damaging drugs. Other unknown drugs were also forcibly administered. As a result, his movements became atrophied, and he had slight facial paralysis and muscle numbness. He also drooled. He was released in August 2004.

Mu is now staying at his sister's place. His elderly parents, who are themselves also physically ill, are taking care of him.

“After Being Illegally Imprisoned for Eight Years, Mr. Lu Shunmin Imprisoned Again for Remaining Steadfast in His Belief”