(Clearwisdom.net) Today's news from China includes incidents of persecution that took place in three cities or counties, in three provinces. In this report, three practitioners were subjected to mistreatment during their detention. 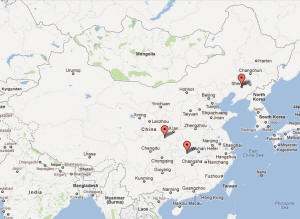 Thirteen Falun Gong practitioners are currently being detained in Division 3 of Masanjia First Men's Forced Labor Camp. Among them is Mr. Wang Haihui, from Heishan County in Jinzhou City. He was sent to Masanjia for the second time in 2010. He has severe heart disease due to the persecution. His wife was pressured to divorce him.

Ms. Sun Jie was reported to the police when she clarified the truth to two college students on a bus three weeks ago. She is currently being detained at a detention center on Fengjing Road in Hantai District.

Ms. Liu Yue is a practitioner from Babao Town in Songzi City. When she went to Fanyu City in Guangdong Province to visit relatives two years ago, she was arrested and sent to Chatou Forced Labor Camp for a term of two years. Her term expired two weeks ago on January 7, 2012, but she has not yet been released.