(Clearwisdom.net) Falun Gong practitioner Mr. Ma Yingquan from Hegang City, Heilongjiang Province, was illegally arrested on August 20, 2011, by the local police and taken to a brainwashing center, where he was brutally beaten and tortured.

The following is Mr. Ma Yingquan's personal account of the persecution he suffered:

I live in the Hegang Xingan area in Heilongjiang Province. Around noon on August 19, 2011, officer Wu Wen rushed to my home and demanded that I go to the police station because Liu Zhenchen, the police station chief, wanted to talk to me.

I went to the police station at 5 p.m. on August 20. Wu Wenchong and deputy chief Zhao Baodong put me in a car and said a city leader wanted to talk to me. They took me to a place opposite the water company. As soon as I got out of the car, six or seven people surrounded me, restrained my hands, and then took me to the Hegang City Brainwashing Center.

When I was brought into the room, they thoroughly searched me and even took off my belt. When I clarified the truth to them, Zhang Zilong beat me. He also ordered me to read “The six behaviors prohibited by the Bureau of Civil Administration.” I refused and said, “I did not commit any crime. Why should I read it?” Zhang Zilong replied, “If you don’t read it, you will never get out of here.” He also claimed that brainwashing center was different from labor camp or prison, as there were no set terms for keeping people there, so they could detain me forever.

They detained me without following any legal procedures. Zhang Zilong brought in an electric baton and told Zhao Jiabin to handcuff me behind my back. They shocked me for a long time while I was restrained and powerless. 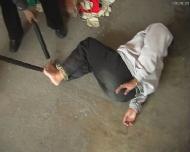 I could not move at all. I screamed because of the pain, so they closed the door and windows. They said that no one could hear me and no one would help me. After they were done with that phase, they demanded that I stand up. They took off my clothes and started to shock me with the electric baton all over my body, including my inner thighs, genitals, belly, ears, most of my head, face, upper and lower lips, and throat. They especially shocked those areas of my body where the flesh is sensitive. They tortured me this way for a long time.

Zhang Zilong also slapped me in the face more than 20 times, until blood flowed from my lips. My teeth and nose were bleeding, and my face was swollen. Huo Guangmin wiped the blood away and then Zhang Zilong started all over again, beating and shocking me. I was in extreme pain and almost suffocated on my own blood.

Zhao Jiabin had handcuffed me so tightly that when they shocked me, my struggling caused the handcuffs to cut into my flesh and my wrists started bleeding. Both of my hands and wrists became swollen and numb. The swelling and numbness didn’t go away even after 12 days. My left thumb and the inner part of my middle finger are still numb today.

Huo Guangmin said that these were just minor forms of torture and that there were many methods he had not yet used. Zhang Zilong emphasized that the concepts of human rights and law were non-existent in this place, saying that what he said was the law and that they decided the term of detention.

One or two persons were assigned to monitor my every single movement and keep records. Every word I said was recorded. Every morning, afternoon, and evening we had to watch the video compiled by the wicked Party [the Chinese Communist Party] to slander Falun Dafa and defame Falun Dafa's founder. We had to write down our “reflections” after watching each program. We had to write three reflection papers every day. We were also required to copy the three statements.

All reflection papers needed to be approved by Huo Guangmin. If what we wrote was not to his liking, he made us rewrite it until he was satisfied. He ordered us to criticize Falun Dafa and its founder. He also ordered me to write a statement saying how well they treated me. How ridiculous! How could he ask me to write something good about them after they had beaten and tortured me?

This is the persecution I was subjected to for 21 days at the Hegang City Brainwashing Center.

“Cultivating in Dafa Is the Safest Thing You Can Do”