(Clearwisdom.net) Today's news from China includes incidents of persecution that took place in 7 cities or counties in 3 provinces. In this report, 7 practitioners were subjected to mistreatment during their detention, and at least 21 practitioners were illegally arrested. 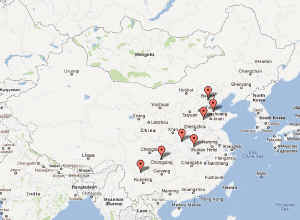 Ms. Li Renying, in her 50s, is a practitioner in Suizhou City, Hubei Province. On February 1, 2012, she was arrested by members of the 610 Office and the Domestic Security Team in Suizhou City. The police also ransacked her home.

Ms. He Fei and Ms. Wang Nengfang from Shiyan City, Hubei Province, were held at the Yunxi County Detention Center since September 2011. The guards broke Ms. Wang's ribs while stepping on her during forced-feeding. Afterwards, Ms. Wang was unable to straighten her back or walk.

In a secret trial held at the Yunxi County Court, Ms. He was sentenced to 3 years in prison, and Ms. Wang was sentenced to 4 years. Both practitioners have been transferred to the Wuhan Women's Prison.

On the afternoon of February 3, 1012, six police officers from the Yanzhuang Township Police Station in Guan County broke into Mr. Yin Zijing's home and arrested him. They confiscated a portrait of the founder of Falun Gong, as well as some Falun Gong books, DVDs, and cassettes.

On the evening of January 12, 2012, Mr. Guo Huibing and his wife, Ms. Feng Shifen, in their 70s, were arrested by six plainclothes police officers from the Domestic Security Division, the Binggu Police Station, and the Miyi County Court. The officers ransacked the elderly couple's home. On the morning of January 13, the Miyi County Court held a trial, and Mr. Guo and Ms. Feng were each sentenced to three years in prison. The two practitioners are currently held at the Miyi Detention Center.

Mr. Rong Wei, a resident of the Haidian District in Beijing, was arrested on November 17, 2011. He has been sentenced to 27 months of forced labor. Mr. Rong is being held at the No. 6 Division of the Tuanhe Forced Labor Camp in Beijing.

Mr. Rong was previously sentenced to 7 years in prison in 2000.

On February 3, 2012, a dozen officers from the Changshou District 610 Office, the Domestic Security Branch Division, the Fengshan Police Station, and the Duzhou Town Police Station in Chongqing broke into Ms. Li Chunyuan's home and ransacked it. Ms. Li's daughter and son-in-law tried to stop them but were arrested at 2 p.m. Around 4 p.m., the police also arrested Ms. Li, Ms. Wu Shuhui, and two relatives who were visiting Ms. Wu. The whereabouts of the arrested are unknown.