Shen Yun Performing Arts International Company put on two shows in McCaw Hall at Seattle Center, in downtown Seattle, on February 7-8, 2012. Despite the CCP's attempted interference leading up to the shows, the performances went on as planned, to the audiences' delight. The artists answered three curtain calls at the end of the last show, and were met with a standing ovation.

According to media reports, on January 8, a month ahead of the Shen Yun performances in Seattle, Gao Zhansheng, the Chinese Consul General in San Francisco, sent a letter to a Seattle City Council member, claiming that a Shen Yun performance would “undermine the Sino-U.S. relationship.” The letter asked the council member not to send a congratulatory letter, not to provide a proclamation for Shen Yun, not to attend the performance, and not to give interviews to media outlets about Shen Yun.

On January 27, more than a hundred people gathered in front of the Chinese Consulate in San Francisco to protest the CCP's interference with cultural events on American soil and its attempt to extend the persecution of Falun Gong outside of China.

On the afternoon of January 30, Seattle TV King 5 reported on this incident and spent quite some time introducing Shen Yun to the viewers.

Seattle City Council members stated that they would not be influenced by the CCP's pressure. Several said that they were surprised when they read the letter and found its remarks and tone to be very inappropriate. One council member said that his friends and family were planning to attend the Shen Yun performance, and that he was considering going as well.

Ms. Wang, spokesperson for the presenter of the Shen Yun performances in San Francisco, said that Gao Zhansheng's act attempted to damage the sovereignty of the U.S.

Shen Yun Performing Arts' 2012 tour in the U.S. has been a great success.

Regina Hackett, a visual arts writer, attended the final performance in Seattle on February 8. When asked how the performance made her feel, Ms. Hackett raved, "I loved it. It was innovative, beautiful, harmonious, and very skilled. ... It had a wonderful range of stories, both traditional and contemporary."

Ms. Hackett went on to point out a particular piece that depicted Falun Gong practitioners being attacked by police in modern China. "Even in the face of such injustice, you can find some radiant peace inside you, and be strong," she said.

Composer: “It blew me away” 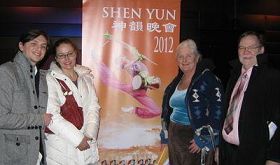 Charles-Henri Avelange, a composer best known for his symphonic musical scores, attended the performance with his wife and friends. "I want to say it is absolutely wonderful. I was definitely amazed by the quality of the performance of the musicians and the synchronization of the choreography with the dancers. It blew me away,” said Mr. Avelange. This was his wife's third time attending the show, and she said she enjoyed it immensely as well.