Reaching Out across the Taiwan Strait (Part 2)

(Clearwisdom.net) “Dear friend, this is a call from Taiwan. First, I would like to wish you and your family well. We want to tell you something very important: there is currently a trend of people in China quitting the Chinese Communist Party (CCP) and its affiliated organizations. They have done so because it’s heaven's will and they can remain safe and be blessed as a result. There are already 108 million Chinese people who have quit the CCP and its affiliated organizations. Have you heard about it?” These are the opening lines of Taiwanese Falun Gong practitioners who call people in China after work to tell them the facts about the persecution of Falun Gong and advise their withdrawal from the CCP. They have no idea who they are calling. How do they arrange their daily lives to make the calls and what is the response from the other end? The following are some practitioners’ sharing.

In part 1, we described Mr. Chang Shiwen’s experiences in making calls. Some other practitioners also gathered to form a call group, share experiences and make phone calls together. They spend their spare time after work to continuously tell people in China the facts about the persecution of Falun Gong and promote withdrawal from the CCP. Some make phone calls in a group after work before going home. Others join the group after finishing their household chores. There are even practitioners in their 80s making phone calls and overcoming dialect difficulties.

Ms. Tang Hui-ru goes to the call group directly after work. To save time, she does not return home but has a simple supper and goes to another practitioner’s home to make phone calls with a few others. They read Falun Dafa teachings first, then make phone calls individually until 9:30 p.m. Finally, they study the teachings again and share experiences. Generally Ms. Tang leaves for home after 10 p.m. In this way, she participates in the group twice a week, and makes phone calls from home other days. She has continued calling for several years. 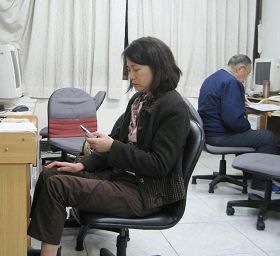 Ms. Tang Hui-ru (left) makes a phone call to China, as does a practitioner (right) in his 80s.

Ms. Tang is nearly 50 years old but appears much younger. She started practicing Falun Gong by co-incidence. She said, “It was a predestined relationship. I was awakened by Falun Gong exercise music. I was the kind of person who likes to stay in bed after waking up. My place was not near the practice site, but I was awakened by the exercise music a little after 5 a.m. I did not know of any neighbors having similar issues. After a few days, I was curious to find the source of the music in the park nearby. Practitioners there invited me to learn the exercises. I thought I would join if I could get up that early. Fortunately, I started practicing Falun Gong, and this is my 13th year.”

The CCP slanders Falun Gong and misleads the Chinese people. Ms. Tang has been calling Chinese people to explain the facts for about ten years. She has made countless calls and helped many people quit the CCP organizations. Many types of people have received her calls and responded differently. Some understood her; others cursed her. Following are a few examples that left a deep impression:

After the publication of the Nine Commentaries on the Communist Party, she often made calls to university dorms. She read the Nine Commentaries to undergraduate students in the dorms. The students liked to listen and later often listened together using a speaker phone. Everyone listened to her reading so quietly that several times, she thought they had hung up. They generally wished to learn more about Falun Gong after listening to the commentaries. After her explanation, many of them understood and some said right away, “Falun Gong is good.”

A lady working in a Japanese company in China agreed to quit the CCP organizations after listening briefly to Ms. Tang’s explanation. The lady said, “I trust you after listening to your sincere words.” She said she hated the CCP and left her work phone number to keep in touch.

Ms. Tang sometimes left her phone number in case some of the people would call back. Sometimes she would teach the them to go online to make statements for their relatives. Several times, she received calls saying some people helped their family members make withdrawal statements online. A migrant worker in Guangdong asked Ms. Tang to play a recording about the facts of Falun Gong so he could record them with his cell phone. He recorded a few pieces and cooperated with his manager (who listened to Ms. Tang’s phone call earlier) to play them to dozens of his colleagues in the factory using the internal public address system. He also helped them quit the CCP organizations. Ms. Tang said, “In China, people who know the facts spread them actively.”

Besides the general public, Ms. Tang also makes phone calls to police. Some police dare not listen, some hang up, and some curse. But she is not affected and continues to clarify the facts by phone. Some become understanding and quit the CCP using aliases.

One head of a police department did not believe Ms. Tang’s words initially. He said firmly, “The government could not do such things,” regarding the CCP-staged Tiananmen self-immolation. From his tone, she could tell he was shocked. But he listened to Ms. Tang’s explanation. At last, he changed his attitude and understood. Ms. Tang said many police were misled by the CCP’s lies and propaganda. They are also victims. This encouraged her to keep telling the facts to them and help them make a right choice.

“What you do is so significant!”

Mr. Cheng Yao-cheng is also a member of the phone call group. Like Ms. Tang, he goes to the call group twice a week after work to make calls before going home. He has been doing this for eight years. Mr. Cheng was weak and had had illnesses since he was young before practicing Falun Gong, but he became healthy after practicing and his hot temper was gone too. 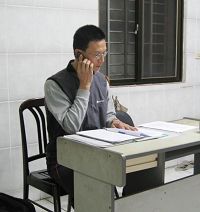 The CCP slanders Falun Gong with all its media. To help Chinese people understand the facts, Mr. Cheng makes phone calls to tell them the truth. He gave a few examples:

Once he made a call, and an older person answered. Mr. Cheng told him about quitting the CCP. The old man did not say anything but listened quietly. Later he hung up after finishing listening. Mr. Cheng sent his phone number to the man using text messaging. The next day, he received a call from the man while he was working on the third floor underground. The man said, “What you do is so significant!” The man called Mr. Cheng on his work phone and did not say more, but just repeated the words, “What you do is so significant!” Later Mr. Cheng felt it was a wonder as he generally could not receive any signals in the workplace underground.

Another older man agreed to quit the CCP after listening to Mr. Cheng’s call. The man asked him, “What else can I do?” Mr. Cheng was touched as the man wanted to help. Thus, he told the man to tell more people to quit the CCP as this is the best and most significant thing to do.

Whoever receives the call or whatever his response is, the practitioners keep telling him the facts. These practitioners make the calls not for themselves, but to help more Chinese people learn the facts and choose a right way for a better future. They will keep doing this.

“Throughout the Ages, Good is Rewarded While Evil Provokes Karmic Retribution”