Mr. Xu Hongbin Subjected to Brutal Beating and Torture in Shandong No. 1 Prison

(Clearwisdom.net) Mr. Xu Hongbin was arrested in January 2010 by Jinan police and taken to Shandong Province No. 1 Prison. During his 19 months of imprisonment, he was subjected to a variety of physical abuse and torture. After he was released in July 2011, the local police continued threatening and harassing him.

When Mr. Xu Hongbin was arrested in January 2010, the perpetrators didn’t show any documentation, nor did they inform his family. He was taken straight to the strictly-monitored group in the prison. The guards attempted to force him to write “five statements,” similar to the three statements, but Xu refused to comply. The guards then ordered criminal inmates Cai Hejie, Zhang Dengyun, Zhou Yunlong, and others to physically abuse him. They beat him with clubs, and hit his head and face with leather shoes.

Xu's was employed at the Press and Publication Bureau of Jinan City. His employer demanded he write essays criticizing himself, and guarantee that he would no longer practice Falun Gong. Otherwise he would be dismissed from his job. Xu refused to agree, and insisted that he would practice Falun Gong all the way until the end. His employer demoted him and told him that he could resume his original job if he guaranteed not to cultivate in the future. He again refused.

While being held in prison, the guards constantly harassed and threatened him, and kept adding to his mental pressure. They employed fatigue tactics to exhaust him, isolated him from the outside, and forbade him from contacting his family by phone. Several thugs once surrounded him and beat him for four hours, and as a result Xu's lower back was seriously injured. He couldn’t move, and his limbs stiffened. The perpetrators subsequently inserted sharp bamboo slivers under his fingernails, and blood immediately oozed out. They also hit his legs and arms using wooden boards imbedded with nails. He was so severely abused that he had not recovered even after two weeks in bed.

Xu was left alone while his wounds and injuries healed. However, as soon as he recovered, the guards and convict thugs started another round of torture. Almost daily, he was subjected to corporal punishment and beatings.

In August 2010, Mr. Xu was forced to stand under the hot sun for five hours every day. He became so dehydrated that he almost collapsed.

Since the guards’ threats and enticement failed to force Xu to give up his cultivation, they doubled their efforts in torturing him. He suffered physically and mentally. Once he spoke with an inmate about Falun Gong, a guard called for seven guards, each holding an electric baton, and eight electric batons were simultaneously applied to different parts of his body. They didn’t stop the torture until he lost consciousness. 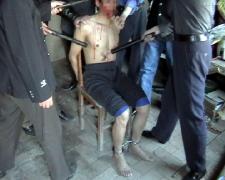 Due to the brutal physical abuse and torture, Xu suffered severe exhaustion, high fever, and he was so cold that his teeth chattered. He could no longer stand up and could only lie on the ground. His clothes were soaked with his blood. He was often made to stand outside barefoot in the snow, handcuffed to a pillar, in freezing temperatures. He lost all feeling in his limbs and his feet suffered severe frostbite.

Xu was forced to stand all night and deprived of sleep. As soon as he closed his eyes, he was awakened. As a result of severe sleep deprivation, his vision became blurred and he became emaciated.

In May 2011, regime authorities connected to the prison ordered that he be quickly "transformed." Xu was placed in solitary confinement. On one occasion he was tortured so severely that he almost collapsed. Nevertheless, the guards continued physically abusing and torturing him, and kept his hands cuffed behind his back.