(Minghui.org) Recently, Wu Shize, a 28-year veteran police officer from Taiwan, told me in a calm and sincere voice, “It has not been an easy road for me. I haven't always been as relaxed and free-spirited as I am now.” 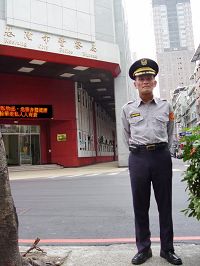 Enrolling in the Police Academy

When Wu was a young man, he believed that there were no gray areas between right and wrong or good and evil. He often said, “It's either right or wrong, nothing to argue about.” At that time, everyone thought that a police officer's job was fraught with danger, so few people pursued law enforcement as a career. Wu explained, “It was only when I ran out of job opportunities that I considered joining the police force. After graduating from the police academy, I was hired by a private company. I truly believed in my heart that I was doing a good thing.”

According to Wu, a police officer's job is tedious, difficult, and dangerous. Officers have to deal with theft, robbery, murder, and traffic accidents, as well as businesses and customer issues. Sometimes they even have to play the role of peacemaker between warring parties.

“We are always trapped between state laws, job requirements, and the general public's expectations. We are always under tremendous pressure. We don't work regular hours or have scheduled days off, so it is hard for us to get any recreation and relax like others. This is probably why most officers look older than they actually are,” Wu said.

In 1997, as a police station supervisor, Wu's superiors demanded a lot out of him and he was always under a lot of stress. His health started to quickly deteriorate. “My complexion darkened, I could feel a hard lump in my liver area, I contracted hepatitis, I lost almost 30 pounds in a relatively short period of time, my skin looked like it had been severely burned, and I couldn't sweat no matter how hot I got. And to make matters worse, I was required to wear an airtight bullet-proof jacket while I was on my shift. It was difficult for me make it through the day, and I always felt very tired!”

At that time, Wu's children were still quite young, so his wife was very worried about his health and started to suffer from severe insomnia. Wu recalled, “Every evening my wife was dead tired after work, since she hadn't slept the night before. So I had to rush home from work—during dinnertime—buy some food, pick up the children, and bathe them. Then I had to rush back to work!” He added, “The more my wife saw me rushing around like that, the more she worried about me, and the sicker she felt—which put even more stress on me. It was a vicious cycle.”

In 1998, Wu was promoted, but instead of feeling elated about his new position, he worried about his declining health and his young children's future. “I was dragging myself around every day, knowing that I might collapse at any moment.”

Finding the Light at the End of the Tunnel

In 2000, after noticing Wu's unhealthy complexion, a coworker told him about Falun Dafa's miraculous healing powers. Wu remembered that he had heard about Falun Dafa on TV, and that many people in China practiced it because of its amazing powers. “After my coworker reminded me about Falun Dafa, I felt like I had been thrown a life preserver,” Wu exclaimed.

Wu read Zhuan Falun and learned the five exercises. “It wasn't easy for me. In the beginning, my body was very stiff, so when I did the sitting meditation, I was in extreme pain,” he recalled. But he kept his legs up in the full-lotus position for the whole hour. Wu said that he could not afford to put his legs down, because then all of his effort would have been in vain. When he started sweating profusely—after not being able to sweat for such a long time—he knew his hard work and persistence had paid off.

Shortly after Wu started practicing Dafa, he felt cold, vomited, and had diarrhea for seven straight days. It was during the Chinese New Year when he had a lot of patrol work to do. To keep warm, he donned a scarf and wore multiple layers of clothing under his uniform. After a week of feeling miserable, Wu felt a level of comfort that he had never experienced before. His complexion turned rosy, the hard lump in his liver area disappeared, and his skin returned to normal.

Wu experienced boundless energy, so he knew that he had passed his tribulation. Seeing his dramatic improvements, Wu's wife began to practice Falun Dafa, too. One day, Wu discovered that his wife had fallen asleep on a sofa—in an upright position! He was amazed, “After suffering for so many years with insomnia, now she is able to sleep soundly while sitting up. It's amazing!”

A Change of Heart

Before Wu practiced Falun Dafa, he would often lose his temper. He became irritable very easily and often beat his children out of frustration. Sometimes, he got so mad at his wife that he kicked the door. Once, a girl on a scooter accidentally cut him off. He shouted at her so loudly that she almost lost control of her vehicle. When he was on duty, he often yelled at anyone who violated the law.

Wu is now a lot more rational and calm. He said, “Practicing Falun Dafa will most definitely change a person's bad nature.”

Being a Public Servant

As a public servant, Wu followed both the letter and spirit of the law. He believed that there was no good reason to violate the law, and he diligently worked to improve his job performance. After he practiced Falun Dafa, he looked at things differently and became much more considerate of others.

After practicing Dafa, he treated his subordinates better and tried to encourage them, instead of ordering them around. When he was forced to ticket certain street vendors for violating a city ordinance, he first thought about their financial situation. Instead of giving them a ticket like he used to, he gave them a warning. If he had to, he would write them out the least expensive ticket that he could. Before practicing Falun Dafa, he had always issued vendors the most expensive tickets he could, hoping that this would dissuade them from repeating their mistake.

Wu talked about the temptations he faced being a police officer. “Some illegal businesses try to bribe you during the holidays, hoping that you will look the other way when they violate the law. Now, after practicing Dafa, no one tries to bribe me. People often say that Falun Dafa is a Pure Land. Indeed it is!”

It's Easy to Fit Falun Dafa into One's Schedule

Wu said, “We run 24-hour shifts here, and we are always under a lot of pressure to close a certain number of criminal cases. Falun Dafa has helped me deal with the pressure and stress of my job. I can exercise more when I have free time, and less when I am busy. If I cannot fall asleep, I read Zhuan Falun and do the exercises. The book tells me how to be a good person and gives me a healthy body. My family life and work environment have greatly improved, as I now conduct myself according to the principles of Falun Dafa.”

Differences Between the Police in Taiwan and China

Wu talked about how the police in China treat Falun Dafa practitioners. “A police officer once told a practitioner, 'If you stop practicing Falun Dafa, you can be a thief or commit crimes and I will leave you alone.'

“The Chinese authorities have put a lot of pressure on the police to suppress Falun Dafa. Officers are encouraged to arrest practitioners, since they get very generous bonuses for doing so. Thus, a lot of officers persecute practitioners, knowing that it is wrong to do.

“We have a Falun Dafa Club in the Keelung City Police Bureau. I find it incredible that the police in Taiwan practice Falun Dafa, while the police in China arrest practitioners. What a bizarre contrast!”