A panel was set up in the House to urge the Australian government to launch an independent investigation into this unprecedented atrocity. Among those in attendance were Parliament representatives, American investigative journalist Ethan Gutmann, and Lucy Zhao, the president of the Falun Dafa Association in Australia. 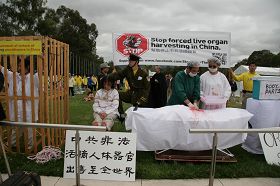 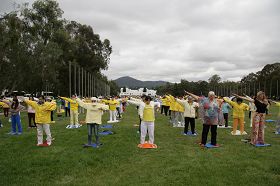 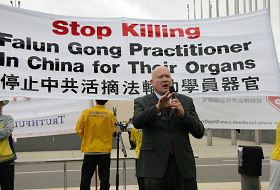 Ethan Gutmann, author of Losing the New China, gives a speech at the rally.

Ms. Zhao said that Parliament representatives who attended the panel discussion were shocked by the CCP's crime of live organ harvesting. The panel suggested that the Australian government inform its citizens of the risk of going to China for organ transplantation, and asked it to expose the atrocity to the Chinese doctors who came to Australia for organ transplantation training.

Since 2006, Mr. Gutmann has been one of the main investigators of the crime of live organ harvesting in China. According to Gutmann’s findings, not only does organ harvesting exist in China, it is also wholly supported by the CCP. He is the author of Losing the New China, and is a regular contributor for the Asian Wall Street Journal. Maria Fiatarone Singh, professor of Exercise and Sports Science at the University of Sydney, also gave the panel a detailed account of her investigative findings of live organ harvesting.

Lisa, a Falun Gong practitioner, spoke at the rally about her mother being arrested many times in China, just because she practiced Falun Gong. Her mom had been brutally tortured and force-fed in jail. When she was released, she left home to avoid further persecution, but was later arrested. To date, no one knows her whereabouts, or whether she is dead or alive. Lisa worries that her mother has also become a victim of organ harvesting. Lisa called upon the Australian government to help rescue her mother, who had been taken away by Beijing police.

Falun Gong practitioner, Guo Changzhu, originally from Anqing, Anhui Province, said at the rally, “I was detained in a brainwashing center; interrogated, and deprived of sleep for extended periods of time. I became hunchback, which made it difficult to walk properly, and I lost control of my excretory functions. I suffered from insomnia, memory loss, and I dropped 55 pounds. I was also confined to a mental hospital and injected with large doses of nerve-damaging drugs. Within two days of being injected, my body turned purple. Shortly after, I suffered from senile plaques.

“After receiving forced injections for a about a week, I felt like I was losing my mind. I kept running back and forth and falling down. I shivered badly and couldn't sit down. It felt like my heart was about to explode; I couldn't smile or move my eyes, and I looked and felt lifeless. I cried every day around 3:00 p.m. I felt confused and it was very difficult to focus properly.

“Then, the hospital had the audacity to ask my family to pay for this so-called 'treatment.' After paying 2,000 yuan, my mom told the hospital that she had run out of money. The doctor warned my mom that if she couldn't pay the required hospital fee, they would have to use a toxic, outdated medicine on me that was used in the early 50s. After a few days of taking this medicine, my body became stiff as a board and I lost all muscle coordination. The idea of committing suicide haunted me all day long.

“Because of the toxicity of the medicine, I was disabled for a few months after my release and I couldn't take care of myself for the following four years. The police told my family and colleagues, 'Look at the condition she is in. That's the result of her practicing Falun Gong!'

“The CCP continues to confine Falun Gong practitioners to mental hospitals for refusing to be 'transformed,'” putting them at great risk of a mental breakdown, disability, and even death.”

Within the past two months, more than 30,000 people in Sydney had signed a petition urging the Australian government to launch an independent investigation into the allegations of organ harvesting in China. Green Party members sent the signatures to the Provincial government, where the issue will be discussed in the upcoming Parliament session next February.

“After Looking Inward Efforts Should Be on Removing Attachments ”