(Minghui.org) When people purchase those affordable products that are “Made in China,” be it clothing, consumer goods, or holiday decorations, they probably don't know that a lot of them are made in Chinese prisons and labor camps, and that behind those products are unknown stories of blood and tears.

1. The Shenyang City No. 1 Prison Produces Boys' and Girls' Ski Jackets that Are Exported to Germany

The Shenyang No. 1 Prison in Liaoning Province forces Falun Gong practitioners and other inmates to do hard labor to make money for the prison. The prison mainly produces clothing, and the majority of the products are for export. About 33 male practitioners are incarcerated separately in nearly 20 prison sections. In order to “transform” the practitioners, the guards not only torture them, but they also force the practitioners to perform intensive clothing manufacturing. If a practitioner is too weak (as a result of the persecution) to go onto the production line, he will still be forced to perform tasks like cutting. Among the forced labor products are boys' and girls' ski jackets that are exported to Germany and snowman Christmas ornaments.

The manufacturing unit of the Shenyang City No. 1 Prison is called the Shenyang Zhongji Garment Co.,Ltd. to outsiders. The company's former legal representative is Liu Guoshan. Liu changed to his new post as the prison political commissar in 2012, where he assumed responsibility for the persecution of Falun Gong practitioners. The company's new legal representative is surnamed Ding.

Authorities at the the Shenyang City No. 1 Prison implement violent torture upon Falun Gong practitioners in order to “transform” them. Prison warden Wang Bin, political commissar Liu Guoshan, and deputy prison warden Qiu Guobin personally direct and make sure that these crimes are carried out.

The practitioners are severely beaten, tied to the iron chair, and deprived of food, water, sleep, and bathroom use for days. The perpetrators pour water on the practitioners and shock them with electric batons powered to tens of thousands of volts. If a practitioner faints, the guards pour cold water over his head to wake him up, and then continue the torture. During summer, they will place two or three heaters around practitioners to “bake” them. After the torture, practitioners often feel dizzy, and their bodies turn black and blue all over.

Prison warden Wang Bin and commissar Liu Guoshan frequently ask the guards, “How come he is not transformed yet?,” thus urging an increase of torture upon the practitioners. Mr. Guo Chunzan, a practitioner in his 50s, was shocked with electric batons to such an extent that his whole body was covered with cuts and bruises. There were three holes resulting from burns on his right wrist. His back was also covered with huge blisters after he was burned with hot water sacks that were filled with boiling water.

After being abused, the practitioners are forced to do manufacturing work with their injuries.

The above Crivit brand girls' ski jacket and boys' ski jackets were manufactured in the Fourth Prison Section in 2011; manufacturing includes sourcing, cutting, sewing, finishing, and packaging. Practitioner Mr. Sun Yongheng, from Haicheng, was incarcerated in the Fourth Prison Section. Mr. Sun served in the military and then changed to civilian work. Mr. Sun was subjected to long term abuse at the Shenyang City No. 1 Prison because he practiced Falun Gong. He was taken to a room without surveillance video, tied to the iron chair, and beaten. The guards baked his face and eyes with high-voltage light bulbs, and they did not let him close his eyes for many hours. After being abused, Mr. Sun was forced to do slave labor. He worked from 6:00 a.m. to 9:00 p.m., and sometimes even later. Mr. Sun would sometimes work 15 hours nonstop, laying the fabric, placing them in order, and cutting a stack of clothes with electric scissors.

The Shenyang City No. 1 Prison still forces Falun Gong practitioners and other inmates to manufacture garments for export under different brands.

The Liaoning Province Women's Prison tortures Falun Gong practitioners in an attempt to force them to give up their beliefs. Over ten practitioners have been persecuted to death in this prison. The prison also forces practitioners and other inmates to perform slave labor. The facility has a sewing workshop, a paper product workshop, and a beauty product workshop (bottling line), among others. It is a large-scale, illegal factory. 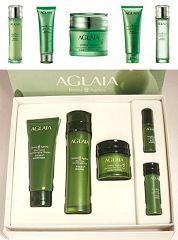 The Tenth Prison Section not only manufactures garments, but also produces beauty products. Beauty products are manufactured on the production line: Filling, capping, coding, cartoning, labeling, sealing, packaging, and warehousing are all performed there. These procedures are all performed by the Fourth Group at the Tenth Prison Section. There are about 60 people in the Fourth Group, which includes Falun Gong practitioners. The guards order that each person must produce at least 10,000 bottles (or 30,000 ~ 40,000 small bottles) per day. Those 60 people have their meals in the workshop, and they must finish eating within five minutes. Restroom use is limited to two to three times per day.

From 2009 to 2011, practitioners Wang Peirong, Wang Shuxian, Li Yuhua, and Shao Changhua were forced to produce Aglaia beauty products. Dai Jing, head of the Tenth Prison Section, and other guards instigated inmates Hu Qiuxia, Wang Min, and others to beat and swear at practitioners.

Ms. Wang Shuxian was often cursed in the workshop. Ms. Li Yuhua was locked in a small cell for 15 days because she spoke to others in the workshop about Falun Gong. Ms. Huo Yuqin stated that it is not a crime to practice Falun Gong, and she refused to perform slave labor. The guards instigated the inmates to beat and swear at her, not let her sleep at night, and criticize her at meetings. In the winter of 2010, the guards took Ms. Huo to the Aglaia workshop and locked her in a small, non-heated room beside the workshop restroom. Ms. Huo was locked in there from 6:40 a.m. to 7:00 p.m. every day. She was nearly frozen for the whole winter, and her blood pressure reached over 200 mmHg. Ms. Huo was on the verge of death before she was released on medical parole.