A Plea for Help from a Slave Labor Camp in China Spurs U.S. Government Investigation

(Minghui.org) On December 23, 2012 a poignant story appeared in The Oregonian about a resident of the United States who opened a package of Halloween decorations, only to find to her great surprise that, folded up within the package was a note written partly in English, partly in Chinese, from a prisoner in a Chinese forced labor camp. The message was a cry for help—like a note stuffed in a bottle and sent across the ocean to summon aid from another shore.

Julie Keith, a resident of Oregon, U.S.A., found the note inside a package she had bought at Kmart. The U.S. Homeland Security has launched an investigation relating to this case. 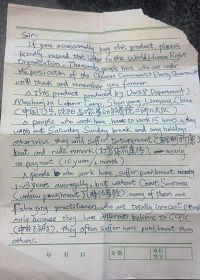 Letter from the Masanjia Forced Labor Camp in China

The letter read, “Sir: If you occasionally buy this product, please kindly resend this letter to the Human Rights Organization. Thousands people here who are under the persecution of the Chinese Communist Party Government will thank and remember you forever [sic].”

The Masanjia Forced Labor Camp is known as one of the most brutal labor camps in China, especially for Falun Gong practitioners.

“People who work here have to work 15 hours a day without Saturday, Sunday break and any holidays. Otherwise, they will suffer torturement, beat and rude remark. Nearly no payment (10 yuan/1 month)”

“People who work here, suffer punishment 1-3 years averagely, but without Court Sentence (unlaw punishment). Many of them are Falun Gong practitioners, who are totally innocent people only because they have different believe to CCPG. They often suffer more punishment than others.”

Ms. Keith was shocked, and could only imagine the desperation of the writer, and the courage it took to put the letter into that box. If caught, the consequences would be unthinkable.

The Letter Released on Facebook to Spread the Message

The Oregonian reported that after posting the letter on Facebook in order to spread it further, she received a large number of responses. Many people had heard of the horrors of Chinese labor camps, but no one had received an actual letter from one. Her friends wrote of their sadness at reading the letter, of the courage of the writer, and how we in the U.S. take our freedoms for granted.

The Oregonian reported that Sophie Richardson, the China director at Human Rights Watch, said, “We're not in a position to confirm the veracity or origin of this. I think it is fair to say the conditions described in the letter certainly conform to what we know about conditions in re-education through labor camps.”

If further investigation determines that these products were indeed created in a forced labor camp, the Halloween decorations from Kmart could bring a blow to the U.S. chain of discount stores, because Title 19, Section 1307 of U.S. Code prohibits the importation of all items manufactured in any foreign country by forced labor.

The Oregonian informed the U.S. Immigration and Customs Enforcement (ICE) about the letter, and ICE's Homeland Security began investigating the case. Kmart's parent company, Sears Holdings Corporation, released a statement saying that they would investigate the case, and if their cooperative companies in China are found to use forced labor, they would terminate the contract.

According to a Minghui website report on December 23, one of the slave labor tasks in the Masanjia Forced Labor Camp is making children's down jackets and pants. The down jackets are known by many brands, including “Webster” and “Bosideng.” The inside of the jacket is filled with down, which causes serious air quality issues in the workspace. The forced labor camp set up a special room, called the “down house.” The workshop walls are very high, and the external walls are even higher and very little sunlight enters the workshop. Dust can always be seen suspended in the air.

Another report on the Minghui website published on November 28, 2012 said that the Shenyang No. 1 Prison in Liaoning Province forces Falun Gong practitioners and criminal inmates to do long hours of slave labor all year long to make money for the prison. Clothing is a major slave labor produced product in the prison. Most of the products are for export.