(Minghui.org) The Congressional-Executive Commission on China (CECC) held a hearing on December 18, 2012, in the Russell Senate Office Building. The hearing, titled “Falun Gong in China: Review and Update,” was attended by eight expert witnesses who discussed in detail the 13-year-long brutal persecution of Falun Gong by the Chinese Communist Party (CCP). Several witnesses focused on the CCP's live organ harvesting of Falun Gong practitioners. The two chairmen of the CECC raised questions about the persecution itself, along with the current state of affairs, and what measures the Commission would need to take to stop the persecution.

The Chairman of the CECC, House Representative Chris Smith (R-NJ), opened the hearing by giving a brief history of the CCP's persecution of Falun Gong over the past 13 years. 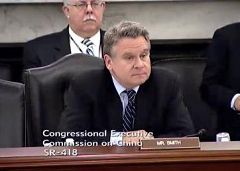 “In the early 1990s, the Chinese government and Communist Party regime welcomed the contributions of the Falun Gong spiritual movement. Its qigong exercises and meditation had health benefits. Its core teaching of Truthfulness-Compassion-Forbearance promoted morality in a society increasingly aware of its spiritual vacuum,” said Mr. Smith.

“All that changed, however, in 1999, when several thousand Falun Gong practitioners peaceably assembled at Zhongnanhai leadership compound in Beijing. Chinese leaders were astonished that Falun Gong had grown so large and prominent outside of the Party control, so large that Falun Gong practitioners might outnumber the Communist Party's 60 million members. Immediately afterwards the Chinese government and Communist Party began the campaign of the persecution against Falun Gong that now has lasted for more than 13 years.

“The persecution has been amply documented by the U.S. Department of State, the U.S. Commission on International Religious Freedom, Amnesty International, Human Rights Watch, Freedom House, and many other human rights non-governmental organizations.”

Rep. Smith described the CCP's campaign against Falun Gong as “severe, brutal, ugly, and vicious.” He said, “Many tens of thousands of Falun Gong practitioners have been detained and arrested; no one can count those sent to prison for long terms, and too many remain there. More were sentenced to reeducation through labor camps; others just disappeared.

“Those released have told of long and brutal interrogations, beatings, sleep deprivation, and other forms of torture. Their captors demanded statements and confessions from the imprisoned practitioners and tried to force them to name other practitioners enrolled in the movement. Rights groups have documented more than 3,000 deaths of practitioners from torture and mistreatment, and doubtless, there have been many more who have died in custody, their stories yet untold.”

Mr. Smith also pointed out that “Parallel to the treatment of the practitioners was a comprehensive propaganda campaign designed to demonize the movement. From their radios and televisions the Chinese people were taught that Falun Gong was a 'heretical cult organization,' and schools taught the same dictated talking points to the young and impressionable.”

Mr. Smith said, “In addition to practitioners being arrested, imprisoned, and sentenced to reeducation through labor camps, the Chinese regime has pressured Falun Gong practitioners to renounce their belief and to stop the practice. This transformation campaign has been documented in our Commission and annual human rights reports and by other human rights organizations. Amnesty International described the campaign as, 'a process through which individuals were pressured, often through mental and physical torture, to renounce their belief.'”

Mr. Smith brought up the September 12 joint hearing co-chaired by the House Foreign Affairs Sub-Committee and Oversight and Investigations and the Africa, Global Health, and Human Rights Committee. He said, “We heard horrific testimony on the issue of organ harvesting in China. The witnesses touched on many issues: transplants in Chinese medicine, transplant tourism, organ donors relying on death row prisoners, and disturbing testimony that Falun Gong practitioners and other prisoners of conscience may have been involuntary victims.” He reminded everyone in the room that the transcripts of that hearing were available to anyone who wanted to read through them.

Co-chairman of the CECC Senator Sherrod Brown (D-OH) described the persecution of Falun Gong as “One of the harshest campaigns against a group of believers in modern times.” He urged the CCP to end the suppression of Falun Gong and to take measures to guarantee its members the right of freedom of belief, expression, and assembly. 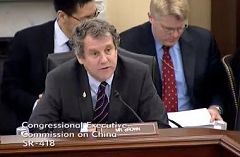 Senator Brown stated, “Unfortunately, the Chinese Communist Party apparently believes that the only way to survive is to stamp out diversity of opinion and belief wherever it occurs.” He pointed out that this will not work, saying, “Threats to freedom only strengthen people's resolve.” 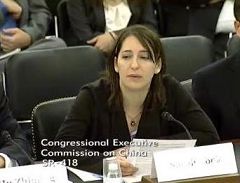 Sarah Cook, Senior Research Analyst at Freedom House, discussed why the CCP launched the persecution against Falun Gong in 1999, citing several factors: the number of Falun Gong practitioners had been constantly increasing during that time—which made the CCP very nervous; there was a huge difference between Falun Gong's principles of Truthfulness-Compassion-Forbearance and the CCP's ruthless, distorted ideology—which made the CCP, again, feel threatened; and the fact that the CCP leader, Jiang Zemin, was extremely jealous of Mr. Li Hongzhi, the founder of Falun Gong.

Ms. Cook believes that the CCP started the persecution of Falun Gong due to its long history of arbitrarily suppressing independent thought and its propensity to launch political campaigns against any and all perceived threats or enemies. Whatever decisions the CCP made were carried out by every government institution, including the judiciary and propaganda departments. 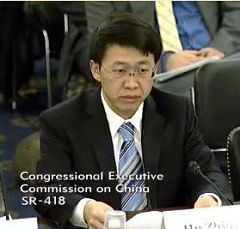 Hu Zhiming, an officer in the Chinese Air Force

Hu Zhiming, a former major in the Chinese Air Force and a Falun Gong practitioner, recounted the horrors of being detained and imprisoned on three separate occasions for his refusal to renounce his beliefs. He lost his home, belongings, and freedom, having spent eight years and two months in prison. While incarcerated, he was subjected to a variety of tortures, including brainwashing, force-feeding, and sleep deprivation. When he was released in September 2009, he was near death. Mr. Hu was later able to flee to Thailand in 2010, where he applied for international refugee status. The U.S. government accepted him as a refugee and gave him permission to enter the United States in 2012. Mr. Hu said, “From my personal experience and observations, I believe that the CCP has been trying to wipe out Falun Gong during the persecution, but has failed in the end. The CCP's days are numbered.” 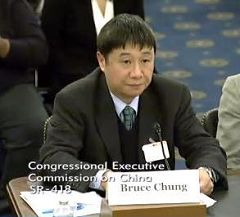 Bruce Chung, a Taiwanese Falun Gong practitioner, was also invited to give his personal testimony. He told the members of the hearing that he was arrested by the CCP's state security agents and detained in China during a family trip in June of this year. He described many of the despicable tactics the CCP employs in the persecution of Falun Gong. He stressed two points: First, the CCP not only persecutes Falun Gong practitioners in China, it also extends its persecution overseas. According to the Taiwan Falun Dafa Association, he is one of 17 Taiwanese practitioners that have been persecuted by the CCP.

Second, the CCP hires overseas spies to illegally collect personal information on Falun Gong practitioners, as well as information on their activities. That way, overseas practitioners will be immediately arrested once they enter mainland China. He feels that the international community should condemn these activities. Mr. Chung also said that his safe return to Taiwan was largely due to the efforts of many upright people from all walks of life. He thinks that the CCP will do everything in its power to conceal its ugly deeds, as it is afraid of being exposed. Mr. Chung said he hopes that everyone will eventually find out each and every evil thing that the CCP has done. 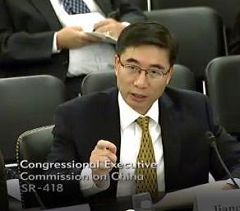 Mr. Jianchao Xu, an assistant professor of nephrology at the Mount Sinai School of Medicine, cited public reports and investigation results that prove that the main source of organs for organ transplantation in China is living prisoners. He said that Ethan Gutmann, adjunct fellow at the Foundation for Defense and Democracies, interviewed victims who were imprisoned in China and detailed his findings in his book, State Organs. According to his research, 65,000 Falun Gong practitioners have been killed for their organs. Mr. Gutmann found that Falun Gong practitioners illegally detained in prisons and forced labor camps were often singled out for medical exams, exams that determine if a prisoner's vital organs are healthy or not. Afterward, many of these practitioners who were examined, mysteriously “disappeared.”

Mr. Smith and Senator Brown showed great concern over the issue of live organ harvesting, and asked the U.S. government to help stop the atrocity. 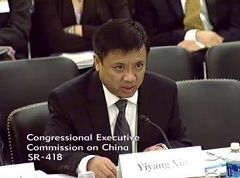 Xia Yiyang, Senior Director of Research and Policy at the Human Rights Law Foundation in Washington, D.C, said that the persecution of Falun Gong lacks a legal base. It's also the same conclusion that Falun Gong practitioners' defense lawyers came to after examining China's constitution and laws. The CCP used all kinds of tactics to circumvent the law and launch its large-scale, anti-Falun Gong campaign. Mr. Xia showed those present at the hearing how the CCP systematically side-steps Chinese law to continue its persecution of Falun Gong. He also detailed the relationship between the key figures in the CCP political infighting and the persecution, particularly Wang Lijun's involvement in the crimes of harvesting organs from living Falun Gong practitioners.

Charles Lee, a Chinese-American who survived three years of persecution in prison; along with James Tong, a professor of comparative politics at the University of California, Los Angeles; and Caylan Ford, an independent researcher and human rights consultant who studies the Falun Gong persecution, discussed the CCP persecution of Falun Gong from different perspectives.

Mr. Smith condemned the brutality of the live organ harvesting of Falun Gong practitioners. He also said that he is proposing a new bill that would target the CCP's live organ harvesting and severely punish the perpetrators, that is, anyone who has committed such a crime in China, along with their relatives and children, will be denied a visa into the United States, forever. He called upon the American media to speak out on this issue so that more people learn the truth.

He believes that organ transplantation is a legitimate medical technology, but there is a basic bottom line: the removal of organs from living people is illegal, horrific, barbaric, and heinous.

The hearing titled, “Falun Gong in China: Review and Update,” which was held by the Congressional-Executive Commission On China (CECC), was broadcast live. A video of the hearing is available on the CECC website: http://cecc.gov/pages/roundtables/general/roundtable2/index.php