(Minghui.org) At the request of the Cheng Ta Hospital in Kaohsiung City, Taiwan, a representative from the International Care Association of Organ Transplants (ICAOT) gave a talk detailing the chilling reality of organ transplants from living Falun Gong practitioners and other prisoners of conscience in mainland China. Doctors and nurses were shocked by the Chinese Communist Party's (CCP) crimes against humanity. They signed a petition condemning the atrocity and said that they would tell their fellow medical professionals about the situation so that no one would unwittingly assist the CCP in their crimes. 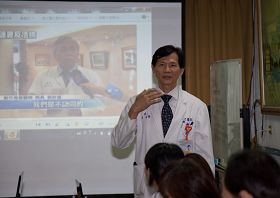 Dr. Lee, director of Cheng Ta Hospital, said that he appreciated the information that the ICAOT shared with his staff. He said, “Based on my experience, it takes a long time for the organ matching process to be completed in Taiwan. Yet, tens of thousands of organ transplants are performed each year in mainland China, pointing to the fact that a huge organ bank exists, consisting of hundreds of thousands of people. This makes perfect sense to me.

“Such an atrocity must be immediately stopped … We must share the information that we learned today with people everywhere. Before people go to China for an organ transplant, they need to register with the Taiwanese authorities and state exactly what hospital, the organ source, and how the organ was obtained. We want the whole medical process to be open and transparent.”

On hearing that the CCP persecutes religious groups and harvests organs from live Falun Gong practitioners, Dr. Lee said, “It is a violation of people's rights. For medical professionals, it is killing instead of saving lives. Even though I don't know much about Falun Gong's beliefs, I do know that all beliefs and all lives should be respected.”

When he was asked about what could be done when doctors in Taiwan tell their patients to go to China for their organ transplants, Dr. Lee said, “Many doctors don't know the facts. They might know that some people sell their own kidneys in China, but they don't know the whole story. If they knew, I don't think any doctor would tell his patients to go to China for an organ transplant.” Dr. Lee hopes that the entire Taiwanese medical field will learn about what is really going on in China so that they can provide timely and accurate information to their patients.

Professor Hsiao Tin-Hsin of the Department of Anatomy, Medical College, Kaohsiung Medical University, said, “ I'm shocked. It is a very serious thing. When Taiwanese people come back from China—after an organ transplant—the Taiwanese government follows up with them and provides them with free anti-rejection medicine. Isn't that the equivalent of assisting in the crime of live organ harvesting? Many organs were harvested from live Falun Gong practitioners. It is absolutely inhumane. This atrocity should be exposed and those involved should be punished.” 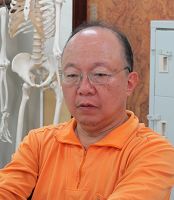 Professor Hsiao said that he would like to give a talk at Kaohsiung Medical University to expose the atrocity of live organ harvesting and call for a collective effort to stop it.

Dr. Chen Hsiu Lin, professor of Neonatology in the Department of Pediatrics, Kaohsiung Medical University, commented on the persecution of Falun Gong, saying: “I have never believed the CCP. They promote atheism and monopolize the media in China. They brutally persecute groups with different ideologies. I think every righteous faith should be respected. Harvesting organs from people who believe in a certain faith is an unimaginable atrocity. It should be stopped right away and those involved should be severely punished.”

Dr. Ding Kaiting of Kaohsiung General Hospital said, “I had heard about it [organ harvesting] when I was a student. However, after seeing the recent evidence, I have come to realize that it is much more pervasive than I first thought. Furthermore, such illegal organ sources could prove fatal for some patients, as the matching process does not take into account the patients' present health condition. After a transplant, a patient would be required to take strong anti-rejection medicine, thus increasing the likelihood of various infections, which could lead to death.” (Anti-rejection medicine weakens the immune system.) Dr. Ding believes that medical professionals, as well as the general public, should be made aware of the facts. 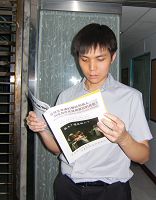 A few days after the meeting at Kaohsiung Cheng Ta Hospital, thousands of employees from different medical circles in Taiwan signed a petition opposing the persecution of Falun Gong and calling for an end to the organ-harvesting atrocity. The Taiwan Health Department advised its citizens not to receive organ transplants from unknown overseas sources. It also plans to improve the registration system and investigate cases of reported intermediary organ transplant doctors.