(Minghui.org) Today's News from China includes incidents of persecution that took place in 9 cities or counties in 6 provinces. According to this report, 9 practitioners were subjected to mistreatment during their detention, and at least 12 practitioners were illegally arrested. 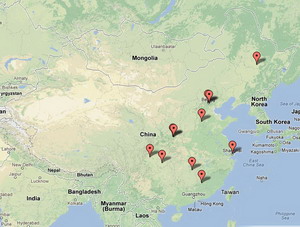 Ms. Wen Mulan from Zhangjiazhuang Village, Jugezhuang Town, is 70 years old. She was arrested by police from the Miyun County Domestic Security Division on February 1, 2012. She was sentenced to five years in August and is now in prison. Her husband, Mr. Zhang Chunyue, 80, suffers from many illnesses and completely relies on Ms. Wen to take care of him.

Ms. Wen has been arrested and her house ransacked multiple times. She was sent to forced labor camps twice.

2. [Ganzhou, Jiangxi Province] Ms. Liang Kuiyan Sentenced to Seven and a Half Years of Imprisonment

Ms. Liang Kuiyan, 52, was arrested by Zhu Fangming, head of the Zhanggong District Domestic Security Division, and others for distributing truth-clarification materials on the afternoon of April 10. Her house was ransacked. Her computer and printer were taken away. Later, she was sent to a detention center for six months.

Ms. Liang was put on trial on August 23 by the criminal court but her family was not notified. She was sentenced to seven and a half years of imprisonment by the Zhanggong District Court.

Mr. Liu Yongsheng, an engineer at the Chengdu Airplane Design Institute, was arrested by Huaqiao Police Station officers on July 12. He is currently being detained at Xinjin Detention Center.

Mr. Gao Ke, in his 50s, from the Daowai District, was arrested by Qizheng Police Station officers for clarifying the facts about Falun Gong on the afternoon of October 22. Later that afternoon, three officers ransacked his house and took his Dafa books and photos of Master Li, the founder of Falun Gong.

When Mr. Li Mingshen from Henantong was on his way to Xingtai to send off his relatives, the police checked his identification and found he was a Falun Gong practitioner. He was arrested by Pingxiang County police.

A group of police officers broke into a clothing store on Fumin Street, Miyun County, in the afternoon on October 22. They arrested the store owner, Ms. Gao Bing, 50, and took her Dafa books and CDs.

Ms. Zhang Yunshen, Ms. Tao Meiyi, and Ms. Zhang Ling from Chongqing and Ms. He Changhua from Liaoning Province were clarifying the facts about Falun Gong in Xian. They were arrested by the Yanta Police Department in December 2011. Yanta District Procuratorate officials charged the four practitioners in September 2012. The court plans to put them on trial soon.

Ms. Xiao Yan has been detained in the Xincheng District Domestic Security Division for over 20 days. Police are attempting to extort 20,000 yuan from her family to have her released.