(Minghui.org) On November 1, the Taipei Local Court sentenced Chou Chingjun, the chair of the Concentric Patriotism Association of the Republic of China (CPAROC), to two months for violently interfering with other people's freedom.

In April 2010, Chen Jianren, a Falun Gong practitioner, was holding a Falun Gong banner in front of the 101 Building in Taipei, clarifying the truth of Falun Gong to the public. Chou and seven other men and one woman came to Chen Jianren. One man grabbed the banner from Chen, and another pushed him down. Chen tried to protect the banner, but two men pushed him down again. The policemen tried to stop Chou and his men, but they could not make Chou and his men leave until officers from Wuhsiung Police Station came. Chen Jianren and other two Falun Gong practitioners, Lin Jiongyi and Hsu Baikun, filed a lawsuit against Chou Chingjun. 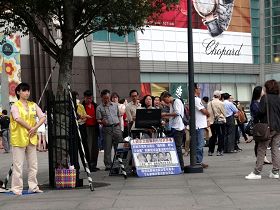 Falun Gong practitioners clarify the truth in front of the 101 Building. 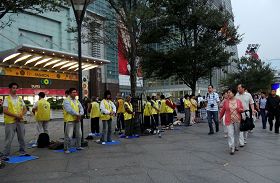 Practitioners demonstrate the exercises in front of the 101 Builidng.

Prof. Chang Chinghsi, the chair of Falun Dafa Association in Taiwan, told the reporter: “The CPAROC has been interfering with our truth-clarification for several years. They not only verbally abuse Falun Gong practitioners, but also physically attack practitioners. Similar to other attacks against Falun Gong practitioners in Flushing, New York and Hong Kong, the Chinese Communist Party (CCP) is behind the attacks by the CPAROC. They try to keep the Chinese tourists from knowing the truth of Falun Gong and the persecution.”

“The violent behavior of the CPAROC should be stopped,” Prof. Chang said, “the verdict is too light.”

The verdict by the Taipei Local Court says that Lin Jiongyi, Hsu Baikun, and Chen Jianren held banners, calling for the end of the persecution of Falun Gong in China; Chou Chingjun had no right to stop them. The verdict said that Chou's behavior interfered with freedom of speech. Considering the fact that Chou refused to apologize afterwards and Chou has exhibited similar behavior before, the court sentenced Chou to two months.

Falun Gong practitioners have been clarifying the truth in front of the 101 Building since March 2009. They hold banners, and pass out truth-clarifying materials to the Chinese tourists. “We not only try to rescue the jailed Falun Gong practitioners in China, but also hope the Chinese tourists will learn the truth and recognize the evil nature of the Communist Party,” Lin Jiongyi, one of the plaintiffs, said to the reporter.

Mr. Lin Jiongyi said: “The people from the CPAROC use the Communist Party's propaganda to irritate the Chinese tourists, and interfere with us. Before, they stayed here for 30 or 40 minutes every day, but recently they have stayed for almost two hours. They not only curse us, but also physically attack us. We filed the lawsuit, but they haven't stopped at all. Based on their behavior, we think that the verdict of two months is too light. We have already appealed.”

Chou Meili, the chair of Friends of Tibet in Taiwan, said: “The CPAROC has been trying to destroy freedom and democracy in Taiwan. They don't have many people, but they have made a big mess. We feel that it is the hand of the Chinese Communist Party.” Ms. Chou hopes that the law can stop the CPAROC's crimes.

“Looking Within and Helping Others with Kind Intentions ”