(Minghui.org) Today's news from China includes incidents of persecution that took place in 7 cities or counties and in 5 provinces. According to this report, 5 practitioners were subjected to mistreatment during their detention and at least 9 practitioners were illegally arrested. 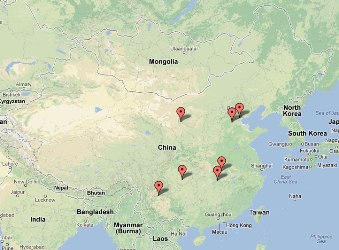 Mr. Wang Zhiyan was arrested at his home by local police in Shabatian on November 7, 2012. Mr. Li Yuanlian and his son from Bajiaojing were arrested that same day. All three practitioners are now being held in Shuanggou Detention Center.

Ms. Zhang Guifang was telling people about the persecution of Falun Gong on November 5, 2012, when officers from the West Jiefang Street Police Station arrested her. The police ransacked her home and arrested her sister, Ms. Zhang Fang, and her son, Mr. Wang Jianjun. All three of them were subjected to a 15-day detention.

Ms. Jiang Changju, 64, from the Yubei District of Chongqing, and her fellow practitioners, 68-year-old Ms. Yin Ziqing and 70-year-old Ms. Wang Anzhen, were arrested by local police and taken to Wangxiangtai Brainwashing Center on November 1, 2012, for writing messages about Falun Gong near the center. The police searched their homes and confiscated their belongings. Ms. Yin and Ms. Wang were released on November 10. Ms. Jiang was transferred to Yubei District Detention Center.

Ms. Li Nianchun is in her 70s. She was taken into custody by brainwashing center agents when she went there to visit her fellow practitioners. Ms. Li launched a hunger strike and after seven days was on the brink of death.

Ms. Yin Zhilan was arrested by local police when she was distributing Falun Gong informational materials on November 9, 2012. Her home was searched. She was eventually released.

A dozen employees of the Hanchuan City 610 Office and Domestic Security Division broke into the home of Mr. Guo Yunxian and Ms. Huang Rongdi, arrested them, and took them to the Second Detention Center of Hanchuan City.

Ms. Li Yuehua was imprisoned in the First Detention Center of Tianjin.

“Ms. Li Jinan, Who Once Assisted a Student in Poverty for Over Ten Years, Persecuted Again ”