(Minghui.org) Shandong Province Police General Hospital for police officers is responsible for treating policemen who work in the Shandong Province prison system. In fact, it is part of Xinkang Prison. Falun Gong practitioners who are tortured in prisons in Shandong Province until they are on the brink of death are often sent to the hospital for so called medical treatment when prison guards become fearful of being held responsible for their deaths. In reality, the “treatment” is an extension of the persecution. Many practitioners who were tortured to death died in the hospital. Very few convicts are sent to this special prison, thus what happens inside is seldom exposed. 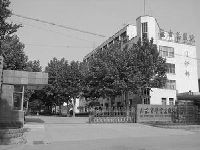 Practitioners sent to Xinkang Prison for medical treatment are accompanied by criminal convicts. Most of the time, the accompanying convicts are rude, impatient, and irresponsible towards the sick person, and often abuse and berate the patient. Prison doctors don't regard the ill practitioner or convict as normal patients. In addition, medical and living conditions are exceptionally bad. Some patients' conditions have deteriorated instead of improving after being sent there for treatment.

There is no price shown on items for sale and expenditure accounts are not public, consequently the prisoners treated there have no idea where their money has gone. The quality of food is extremely bad and causes those who eat it to contract diarrhea. Most of the ill convicts are not given enough food. The attendants are very lazy and no one cleans the toilets or other areas of the hospital, thus even the corridors stink. One ward has no window screens and many mosquitoes were seen in it. The screens in another ward have not been cleaned or changed for five or six years, so the mesh holes are filled with dust and there is no air circulation at all. In summer, severely ill patients lie on smelly beds all day and even the attendants refuse to enter the room.

Worse still, patients with contagious diseases are not separated from other patients. Thus in the same ward there are cancer patients, tuberculosis patients, and hepatitis patients all sharing water and other necessities. Patients are fearful of catching other illnesses even before they have recovered from their original sicknesses. Such disregard for the most basic patient care is a violation of medical ethics.

According to convicts who were previously treated at Xinkang Prison, on June 20 2009, the No. 11 Division of Shandong Province Prison sent the body of practitioner Lu Zhen, who had already been beaten to death, to the hospital in a car. To fabricate false evidence, they put his body on an intravenous drip then did an ECG and took photos of his body. This took nearly two hours. They finally declared that he'd had a relapse of a heart attack and died after efforts to save him failed. Over 50 convicts were present and saw wounds as well as bruises all over Lu Zhen's body.

The hospital also has undeniable responsibility for Li Xiuzhen's death. According to convicts present, Li Xiuzhen was sent to the hospital because she went on a hunger strike to protest the persecution. Her monitor treated Li Xiuzhen badly despite her extremely weak condition, beating and scolding her. The doctors and police officers present did not stop the mistreatment. Several days before her death, a monitor lifted Li Xiuzhen, who had been reduced to skin and bones, and forced her to walk with great difficulty to the toilet to empty the spittle bucket. She lifted Ms. Li by her collar, as though she were a dog, and half dragged and pushed her, making her empty the bucket.

Practitioner Bi Jianhong who was on the brink of death was locked up by attendants in a tiny black room and beaten.

“Awakening the Consciences of Prison Guards and Inmates”