(Minghui.org) The 2012 European Falun Dafa Experience Sharing Conference was held on October 27 at the Saint-Michel Theatre in Brussels, the capital of Belgium. Attending the events were more than 1,000 practitioners from 22 countries, including Belgium, the Netherlands, Germany, Austria, Switzerland, France, the U.K., Ireland, Denmark, Sweden, Finland, Spain, Italy, Greece, Latvia, Romania, Poland, and Serbia. More than 20 practitioners from different countries shared their cultivation experiences. Their papers were translated into 19 languages.

Practitioners shared how they look within, cultivate away human attachments, and let go of attachments to self to cooperate with the one body in various truth clarification projects. One newer practitioner began practicing Falun Gong early this year after she attended a Shen Yun Performing Arts show. She talked about how she changed from focusing on her personal cultivation to stepping forward to speak with people about Falun Gong and the persecution. 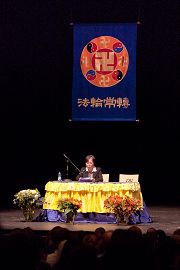 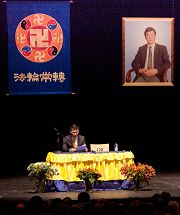 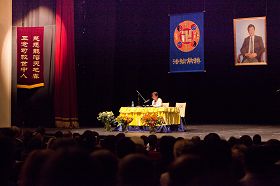 Cultivating away the Competitive Mentality

Ms. Dai from the Northern Europe shared her experience of making phone calls to police officers in China. At the beginning, when she encountered a police officer who swore at Dafa and Master, her heart was moved. The police officer spoke loudly, so she spoke even louder than him, feeling that she must overrule him, so that he would listen to what she told him. But Master's teachings made her realize that she actually had a competitive mentality and resentment toward the police, and she should let these things go.

Ms. Dai attributed her competitive mentality to having been affected by the communist party culture. So she made great effort to read the Nine Commentaries on the Communist Party, Disintegrating the Party Culture, and other related books, consciously removing factors of party culture. She tried harder to look within whenever she encountered conflicts. At the beginning, she didn't want to look within and she would explode when other practitioners criticized her. Gradually, she could force herself to endure, instead of refuting others, but she bore it with tears, and looked within with the feeling of being wronged. When her heart was moved, she began studying the Fa to calm down. In this process, she has felt the gradual emergence of her kind nature.

Ms. Zhang from Spain came across a Chinese man at the entrance to the subway as she was distributing Falun Gong informational materials. The man took the materials, tore it up and threw it on the ground. He even swore at Ms. Zhang. Ms. Zhang didn't get angry, instead she smiled and spoke with the man. Other people gathered around, surprised that she didn't lose temper while being sworn at. Ms. Zhang told them that she could do so because she cultivates Truthfulness-Compassion-Forbearance. After learning about the persecution of Falun Gong, many Chinese people declared their resignations of the Chinese Communist Party (CCP) and its affiliated organizations.

Ms. Zhang later met with that Chinese man several more times. Ms. Zhang thought, “As long as he can be aware of the truth, I don't mind how he treats me.” So every time she smiled and greeted him, and patiently spoke with him about the facts. His attitude gradually changed. Several days later, he took the initiative to declare his resignation from the Young Pioneers, one of the CCP organizations. He also brought two of his friends, and they also withdrew from the CCP organizations.

A practitioner shared a moving experience from when they held the Truthfulness-Compassion-Forbearance Art Exhibition. A gallery owner in Vienna was at first skeptical about the art exhibition, because the paintings are not originals, but replicas. When practitioners explained further about the persecution of Falun Gong and their mission to let more people know about it, the gallery owner changed her mind and agreed to lend the venue free of charge for three weeks to hold the art exhibition. She covered the rent and sent invitations to her 2000 clients to invite them to attend the opening ceremony. She also prepared refreshments for the ceremony.

Jessica from Belgium talked about how she changed from looking externally to looking within. She said, “For a period of time, I had xinxing friction with a practitioner. Every word that practitioner said seemed to target me, but what I saw were all that practitioner's faults and human attachments. At that time, I always wanted to dodge the practitioner when I saw him online.” Jessica realized that she should improve her xinxing, and not evade the problem. So she intensively studied the Fa, and sent righteous thoughts to eliminate the barrier between herself and that practitioner. Through constant xinxing improvement, she found that the problems she saw in the practitioner were a direct reflection of her own problems.

After Jessica broadened her heart, she felt her mind at ease. When others complained about that practitioner to her, she was not affected, instead she was considerate of that practitioner and could harmoniously deal with the conflicts between practitioners.

Andrea from Sweden lives in a country that focuses on equality and feminism, so she was deeply influenced by these thoughts. If she did more household chores than her husband, she would feel it was unfair and complained in her heart. Once her husband told her, “You should reduce your working hours, and focus more on the family.” She knew it was meant for her improvement, but she found it hard to accept being told what to do. She felt irritated although on the surface she did as he asked her to do.

While watching Shen Yun Performing Arts performance, from those female dancers, Andrea saw that women should be gentle and kind. She understands that Dafa practitioners should set an example for next generation, so she should become a gentle and kind woman. As a practitioner, Andrea thinks that she should become a better person, a good daughter, good colleague and of course a good wife through her cultivation practice.

Krystal from the U.K. couldn't handle well the relationship with her mother-in-law before she practiced Falun Gong. All trivial things were accumulated into a difficult situation over years. Her mother-in-law also nagged about many things and sometimes greatly upset Krystal.

When Krystal decided to practice cultivation, how to handle well the relationship with her mother-in-law became a big test. She decided to conduct herself in accordance with the requirement of a cultivator. When her mother-in-law nagged, she smiled and didn't mind it. She smiled more and cared for her mother-in-law more. Unexpectedly, in a very short period of time, Krystal surprisingly found her mother-in-law's attitude toward her had changed greatly. Led by Krystal and her husband, her mother-in-law also began practicing Falun Gong and her health dramatically improved. Whenever her friend's relatives praised her for her good health, she always said, “You should learn Falun Gong. Falun Dafa is great!”

After the Fa conference concluded, many practitioners said that each speech contained elements that inspired them and helped them see their own shortcomings in cultivation. The annual European Fa conference is like a refilling station, pausing for a while in order to move forward more diligently on the path of cultivation practice.

“Ms. He Yingtao’s Personal Account of Persecution--Husband Wrongfully Indicted and Dies As a Result of Torture”

“My Cultivation Experience Promoting the Documentary Free China: The Courage to Believe”