Villagers Sign Petition for the Release of Liu Haitao (Photos)

(Minghui.org) On the morning of September 25, 2012, Falun Gong practitioner Mr. Liu Haitao from Qingyuan County, Liaoning Province, was beaten and illegally arrested by police officers who broke into his home. He has been detained ever since. Mr. Liu has been working to support his parents. His mother is mentally ill. When the police arrested him, his mother's mental illness became worse due to the shock. Fellow villagers were very sympathetic towards the family. They condemned the Chinese Communist Party (CCP) for persecuting kindhearted Falun Gong practitioners. The villagers signed and placed their fingerprints on a petition asking for “The Release Our Upstanding Young Man, Liu Haitao.” 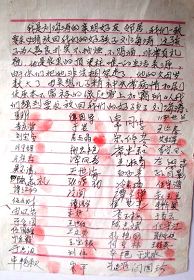 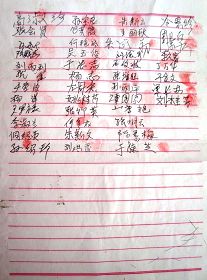 The petition said: “We are friends, relatives, and neighbors of Liu Haitao. We all ask for the release of this upstanding young man. He is kind and simple. He does not smoke or drink alcohol, and he is very polite. He is the only member of his family who is working and providing an income for his family. When you arrested him, his elderly mother's mental illness became severe since she missed and worried about her son. Their family finances were already poor, now they are even worse. We strongly urge you to release this good young man, Liu Haitao.”

Witnesses to the arrest say, “The police are worse than gangsters”

At about 6 a.m. on September 25 as Liu Haitao's father stepped outside his door, about six people rushed into the yard. There were two white vans parked outside. They told his father, “Police. Here to check the situation.” Mr. Liu's father shouted to his son inside, “The police are here!” Liu Haitao came out in his underwear and asked, “Who are you looking for?” The police did not let him talk and pushed him inside the house.

When Mr. Liu's father shouted, “Help!” the police covered his mouth and told him he should “cooperate.” The police asked the father his name, age, and where he came from. They also asked for his residential record and ID. The police stopped Liu Haitao's parents from coming into the room to help their son.

Once again Liu Haitao asked, “Who are you looking for?” The police replied, “You.” Four officers held Liu Haitao on the ground and handcuffed his arms behind his back. They took him, dressed only in his underwear, to the police car. Then the police ransacked the family's house, making a big mess. Mr. Liu's father asked several times if his son could at least return to get dressed. After he got into the room, he saw blood on the floor; it was the blood of Liu Haitao after he was violently beaten by the police.

One of Liu Haitao's eyes was swollen after he was beaten. When the police beat him, his neighbors were woken up by the noise and came out to see what was happening. Mr. Liu's sister shouted, “Stop beating him! You're going to injure him!” But the police still did not stop.

The neighbors witnessed the Fushun Police breaking into the home without a warrant, arresting residents, and robbing them of their personal belongings. The neighbors said, “These police officers are more evil than the gangsters from the past.“

Liu Haitao's mother is mentally ill. When the police beat her son, she was so upset that she became even more withdrawn. She left when nobody was noticing. Mr. Liu's father ran out to look for her, and when he came back, the police had confiscated his motorcycle. The next day, Liu Haitao's sister went to the police department and got the motorcycle back.

The police broke into practitioners' homes. After they asked for their names, the officers put the practitioners in handcuffs. They also threatened them, saying that if they tried to escape, they would be shot. The police arrested all the visitors in the practitioners' houses. If any of them were also practitioners, they were detained. Practitioners arrested include: Liu Liying, Jiang Yan, Wang Fajun, Jia Yunlong, Liu Haitao, Liu Weibin, Li Wensong, Liu Yulan, Li Hengliang, Hu Fengju, Zhang Guangying, Gai Yongjie, Liu Yingjie, Dong Zhuangnan, Fu Wenquan, Liu Shaoyi, and Li Fengxiang.

“How My Fellow Practitioners Escaped Danger”

“Wife and Son of Just-Killed Engineer Frequently Harassed by Police”