(Minghui.org) The 2012 Poland Falun Dafa Cultivation Experience Sharing Conference was held in Warsaw on November 10, 2012, as practitioners came together to exchange their understandings and insights and share their experiences on the path of cultivation. 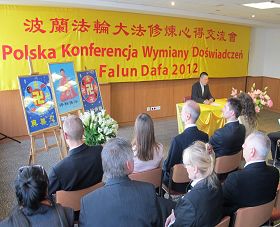 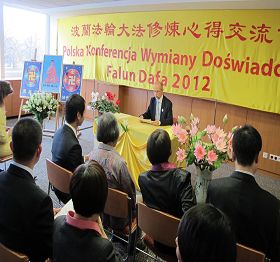 Western practitioner Jaś said that he is not a person-in-charge of the Falun Dafa Association, and neither is he an official coordinator. Moreover, he lives far away from Warsaw and there are few fellow practitioners around, but being a Fa-rectification period Falun Dafa practitioner, how to promote Falun Dafa in Poland, he clearly realized, is the path of cultivation that Master has arranged for him. Steadfastly believing in Master and the Fa, he broke through layers of obstacles from inside the practitioner community and the outside world, and managed to organize and coordinate promotional activities across Poland. They also sent out a large number of truth clarification letters to local governments of different levels and different religious communities. Each promotional activity attracted local media outlets that brought timely news about Falun Dafa to the Polish people. These local news stories often appeared in the country's national media news. With revered Master's strengthening, the effect of the promotional activities has gradually increased, but there are still many aspects that need to be replenished and adjusted. He will strive forward diligently along with practitioners in Poland, strengthen the power of the whole entity, and break new ground to clarify the truth to the Polish government.

Western practitioner Mateusz shared two of his understandings. One is that he found that he had strong attachments to reputation and fame, he was jealous of others, and he was convinced that he cultivated well and looked down upon others. All these attachments had become obstacles for him to assimilate to Truthfulness-Compassion-Forbearance on his path of cultivation. After having gone through a painful process of removing his human attachments, he finally found his true self, and passed the xinxingtests. The second experience is that being a practitioner who obtained the Fa later, in order to catch up with the process of Fa-rectification, he persisted in studying the Fa until he could successfully recite the first four lectures in Zhuan Falun.

Mr. Huang from China shared his cultivation experience in recent signature collection activities, and miracles he witnessed. “Doctors Against Forced Organ Harvesting, DAFOH” initiated a signature collection drive appealing to the UN to investigate the CCP's forced live organ harvesting in China. Mr. Huang went to apply for a permit for using a venue to hold a signature collection activity. Unfortunately, he found that the application must be submitted two weeks ahead of the event, and their ability to freely use the venue was denied. With his firm belief that “everything comes for Dafa,” his truth clarification efforts and Master's strengthening, all his wishes finally came true: the signature collection event was not delayed for one day. At the same time, in the process of collecting signatures, Mr. Huang noticed that the number of signatures increased with the practitioners' improvement in their xinxing. He truly understands the deeper meaning of cultivation.

Western practitioner Doris said that because she had too many household chores to do over the past years, she had slowly slacked off in her cultivation, and with the expansion of her attachment to comfort, she almost separated from Falun Dafa, until one day revered Master gave her a hint: She was alone sitting in a small boat, drifting in a dark sea with rough waves. Her boat became farther and farther away from the huge ship filled with Dafa disciples. The scene shocked her, she awakened and realized Dafa disciples' responsibility and tens of thousands of years of waiting. She realized that she can still cultivate even though she has many household chores. What is important is her improvement of xinxing. Doris has found her position in Fa-rectification and is catching up with fellow practitioners.

Maria has cultivated for 15 years. She told of her experience of cultivating Truthfulness-Compassion-Forbearance. She enlightened that she should not only treat everything in the outside world with kindness, but also kindly treat all sentient beings inside her body. She shared her wonderful feeling when she communicated with sentient beings inside her body and satisfactory outcomes she achieved.

Newer practitioner Mirka also reported to revered Master her cultivation experience after she walked into Dafa cultivation. Particularly she was eager to take part in the European Fa Conference held this year, but many practical problems made achieving her aspirations difficult. Unexpectedly all the problems were resolved one day ahead of her departure. She miraculously solved financial a problem, and the problem of getting off work. She was deeply amazed by the extraordinary power and beauty of Falun Dafa.

The Fa conference came to a close amidst warm applause at 3:00 p.m.. After the conference, all the participating Dafa disciples held a group Fa study and discussion at the Warsaw Fa Study Site. They looked within to find their own shortcomings, and filled in the gaps. They said that they will truly assist Master in rectifying the Fa, and be more diligent amidst the improvement of the whole body.