(Minghui.org) The annual Atlantic Antic Street Festival was held in Brooklyn, New York on Sunday, September 30, 2012. The various stands were spread over half a mile along the street. From noon into the evening, people visited the crowded and well-known festival. 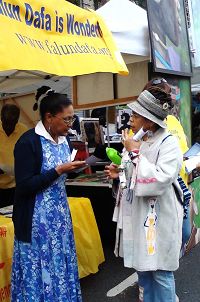 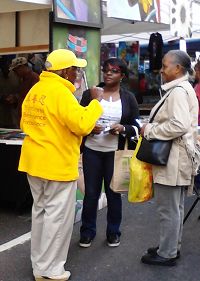 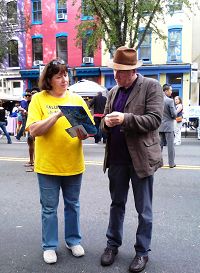 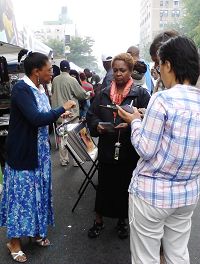 This was the fifth year that Falun Gong practitioners participated in this busy festival to spread the facts about the practice. A golden banner worded “Falun Dafa is wonderful” was hung over the stand. Paper-folded lotus flowers with bookmarks decorated the stand and were given to visitors.

Many people were shocked upon hearing of the Chinese Communist Party's (CCP) brutal persecution of Falun Gong practitioners, especially the CCP atrocities of live organ harvesting. Many signed a petition condemning the crimes. One lady with her three children signed the petition and asked how to learn the practice. A young couple of Russian who had never heard of Falun Gong were indignant upon hearing of the cruel persecution and signed the petition. They also expressed interest in learning the practice.

The practitioner commented, “People came one after another. Many expressed interest in learning the practice. It is a good sign. We are pleased to participate in this festival. It is great that many people come to know about Falun Gong at this event. It is a delightful experience.”

“Westerner Practitioner: Protesting the Persecution of Falun Gong in Front of the Chinese Embassy ”

“Prison Ward Captain Who Persecuted Me Quits the CCP ”