Toronto, Canada: Experts Call for an End to Organ Harvesting at a Public Forum

(Minghui.org) A forum titled “Organ Harvesting Crime in China: Why It Matters to Canadians” was held on September 29, 2012 in Toronto, Canada. Experts called for action from everyone to stop such a crime against humanity. What needs special attention is the fact that this crime is still happening in China today. 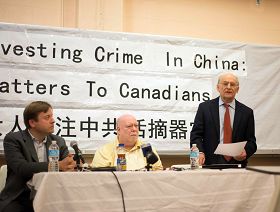 Since 2006, David Matas, an internationally renowned human rights lawyer, and his co-investigator, David Kilgour, a former member of Canadian Parliament and Secretary of State for Asia-Pacific, have conducted an independent investigation over the allegations of forced, live organ harvesting by the Chinese Communist Party (CCP). Their investigations found at least 52 verifiable pieces of evidence to prove that harvesting organs from living people for transplantation exists in China, and most victims are Falun Gong practitioners. Their investigative report was published as a book, Bloody Harvest, in 2010, and detailed all of the evidence.

In addition to conducting a great deal of investigations, Matas and Kilgour have traveled around the world to bring this atrocity to people's attention and call for an end to it. Matas spoke about the developments in the forced organ harvesting at the forum on September 29. He said that there have been many changes on this issue over the past few years both in China and the international community.

The number of organ transplants in China has gone down considerably, and the Chinese communist regime has changed its policy on organ transplants, Matas said. Unfortunately, such organ transplant abuses haven't stopped in China. The transplanted organs in China were mostly from prisoners, and as far as he knows, the majority were from Falun Gong practitioners.

Matas said that what he is concerned about is stopping the killing of Falun Gong practitioners for their organs, but he didn't think that this objective has been achieved. On the contrary, there might even have been an increase. He said the volume of transplants has been reduced, but the number of executed prisoners, another organ source, has also gone down. This means that the number of organs from Falun Gong practitioners has increased.

When answering questions, Matas said that we can't rely on the CCP to change for itself. We should not predict what will happen in the future. “Let us make the future,” he said. Matas made five proposals: the Canadian government should ask the American government to release the information they obtained from Wang Lijun about live organ harvesting; Congress should enact legislation to criminalize the complicity of organ transplantation abuses abroad; compulsory reporting should be instituted around transplant tourism; pharmaceutical companies should stop going to China to do anti-rejection clinical drug trials; and health insurance should be denied for organ transplants abroad that might have violated Canadian law. Matas said that it is necessary to set up security measures to prevent organ transplantation abuses in China.

Everyone is Duty-bound to Stop the Evil

Toronto resident Mr. Fan attended the forum and said that he has been concerned about the things happening in China. “Organ transplants in China are horrible. There has never been such a terrible thing occurring in human history,” he said, “I used to doubt there was such a thing, but now since it has been laid bare before the world, it cannot be concealed.”

Mr. Fan from Hong Kong said that his conscience told him that he should speak up for the human rights of the Chinese people, “I should not have fear, because one should have human dignity. My conscience tells me to do something.”

Nora Anderson, a nurse in Toronto, said after the forum that she thought that it is very important for Canadians and the world's people to learn about the human rights crimes committed in China, because China is becoming a very important trade partner. She thought that they have an opportunity to use the economy to urge the Chinese regime to make a change. Anderson believes that human beings are a whole entity, she said, and anything we do will affect others. The CCP's human rights abuses are not a local problem, but they affect every one of us, so we must speak up and ensure that change occurs.

Sanderson Layng, VP and CEO of the Canadian Centre for Abuse Awareness, said that organ harvesting is not something far from us—we are all a part of the global village.

More People Stand Up to Condemn the Organ Harvesting

There were only two authors when Bloody Harvest was published two years ago, but 12 expert authors from various professions were involved in writing the book State Organs:Transplant Abuse in China, published in July 2012.

Dr. Torsten Trey, co-editor of the book, is also the Executive Director of the medical group Doctors Against Forced Organ Harvesting. He said that the CCP is the main factor in the evil practice. The CCP has turned China into a society lacking ethical standards. The lack of ethical standards leads to Chinese doctors getting involved in the crimes of harvesting organs.

Dr. Arthur L. Caplan is head of the Division of Bioethics at New York University Langone Medical Center. He said that the ultimate ethical responsibility for organ transplants lies in transplant teams. They can not say that they have no idea where the organs were from, and they cannot say that they don't care about the source of organs.