(Minghui.org) Today's news from China includes incidents of persecution that took place in seven cities or counties in five provinces. According to this report, six practitioners were subjected to mistreatment during their detention, and at least 15 practitioners were illegally arrested. 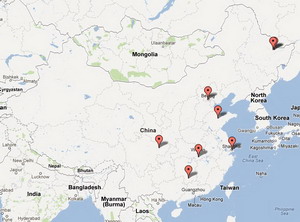 Mr. Wu Yi and Mr. Zhang were arrested on October 2, 2012, for speaking with people about Falun Gong. They are being held in the local detention center.

Ms. Li Hongying and Ms. Mu Mingxiu were reported for telling people about Falun Gong on the morning of October 2, 2012. They were arrested by officers from the Xicheng Police Station. The officer slapped Ms. Li in the face. Ms. Mu was released the same day. Ms. Li is being held at the Qili Detention Center.

Ms. Li Huaiying from the Yangpu District has been missing for two months. Her current whereabouts are unknown.

Mr. Zhu Degui's wife, Ms. Li Xiaoying, was arrested in 2001 and taken to the Qingpu Forced Labor Camp. She was hung up and beaten for 15 days. She was force-fed with poisonous drugs and became mentally disordered.

Several officers from the Hongjun Police Station broke into Mr. Cheng Shouxiang's home on the evening of October 3, 2012. The police arrested him and confiscated a computer, printer, DVD burner, DVDs, and other personal belongings.