(Minghui.org) From October 6 to 8 2012, the annual Naha Great Tug of War Festival was held in Naha City, Okinawa, Japan. The Taiwan Divine Land Marching Band participated in the parade on the 6th on International Avenue, along with 20 other groups. The marching band in blue-white uniforms attracted the attention of visitors from many countries. Some spectators chanted, “Wonderful!” 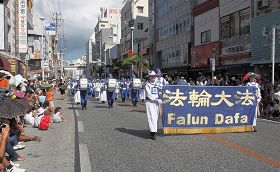 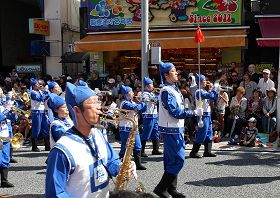 Upon seeing the Divine Land Marching Band, some Japanese tourists chanted, “This is wonderful!” Some female college students jumped and applauded. One lady remarked, “The marching band is very special. The members have a wide age range, the music is good, and we very much appreciate their coming to Okinawa from Taiwan.” The celestial maiden dance team composed of Falun Gong practitioners from Taiwan also received warm applause, and many tourists said, “So beautiful!” 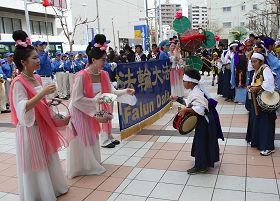 On the 7th before the Great Tug of War, the Taiwan Divine Land Marching Band performed at the Flag and Banner ceremony. The celestial maidens passed out lotus flowers with bookmarks that read “Falun Dafa”. The bookmarks were printed with “Falun Dafa” and “Truthfulness-Compassion-Forbearance”. Many people read them and wanted to learn more about Falun Dafa, and some also asked the practitioners to demonstrate the exercises.

For the tug of war, the gigantic rope is a Guinness World Record holder, measuring 200m (656 feet) in length, and weighing more than 40 metric tons. The event attracted 270,000 tourists. The rope has male and female ends, representing the Ying and Yang. The tug of war was performed between east and west with more than 10,000 people participating. After 30 minutes, the west side won. 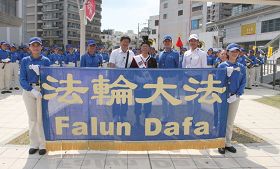 The Mayor of Naha City, Mr. Takeshi Onaga welcomes and thanks the Divine Land Marching Band.

The Mayor of Naha City, Mr. Takeshi Onaga, welcomed and thanked the Divine Land Marching Band for participating in the parade and the tug of war festival. He said, “To the Taiwan Divine Land Marching Band for performing at the Okinawa festival, we appreciate and welcome you very much . I am very honored to have you come to our city. The performance at the parade was excellent. I hope you can participate in the festival next year. ” 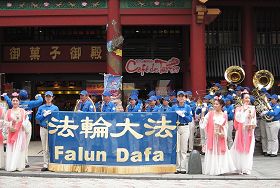 On October 8th, the Taiwan Divine Land Marching Band was invited to perform at a famous specialty store on International Avenue. The store has the same design as the Palace of Ryukyu with a grand outward appearance. The celestial maidens passed out lotus flower bookmarks to the tourists. People were very happy to receive the lovely gifts and thanked them in Japanese, “They are so beautiful, so lovely.” Some tourists wanted to take a photo with the maidens with the marching band in the background.