(Minghui.org) Today's news from China includes incidents of persecution that took place in 6 cities or counties in 5 provinces. According to this report, 36 Falun Gong practitioners were subjected to mistreatment during their detention, and at least 4 practitioners were illegally arrested. 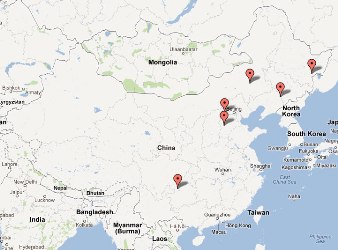 Ms. Li Ruihuan, 55, was arrested in January 2002 in Beijing. No information has been heard about her since. It has been reported that Beijing police beat her so hard at the time of her arrest that she couldn't move.

Eighteen practitioners were arrested on the morning of September 25, 2012. They are:

Mr. Yuan Jinfeng and Ms. Shen Meilan were arrested on the morning of October 6, 2012. Their homes were ransacked. Ms. Li Guilin and another practitioner were also arrested at home that same evening. The current whereabouts of the four, all Falun Gong practitioners, are unknown.

610 Office head Wang Xuehui has committed a series of evil deeds to attempt to force practitioners to give up Falun Gong. He has been involved in the persecution of more than a dozen practitioners, including: Ms. Wang Wenying, Ms. Mu Rongmin, Ms. Wang Wenlian, Mr. Jiang Yabin, Ms. Xie Guizhen, Ms. Fan Yanmin, Ms. Fan Liqin, Mr. Zhao Bin, Mr. Li Haiyan and Ms. Lin Guihua. This has been going on since Jixi City Brainwashing Center was set up in October 2010.

On the morning of October 28, 2010, led by Yang Bosheng from the 610 Office, a group of people went to Ms. Wang Wenying's workplace—Jiguan District Court. They deceived her into going to the brainwashing center.

On May 25, 2011, the 610 Office head Wang Xuehui and others waited at the entrance to the Mudanjiang Prison, and took Mr. Jiang Yabin, who had just completed his three-year prison term, straight to the Jixi City Brainwashing Center.

On August 10, 2012, after failed attempts to send Mr. Zhao Bin and Mr. Li Haiyan to a forced labor camp, the 610 Office agents sent them to the Xinghua Mine Brainwashing Center.

On the afternoon of August 17, 2012, Ms. Lin Guihua was arrested as she was attending a meeting at the Jidong Trade and Industry Bureau, and taken to the Xinghua Mine Brainwashing Center.

Officers from the Balinzuo Banner Police Department along with five officers from the local police station broke into Ms. Han Xiuyun's home. They ransacked it and confiscated Falun Gong books and her cell phone card.

Mr. Shu Anqing, Ms. Zhang Ziqin and Mr. Luo Zhenggui have been held in the Gulin County Detention Center for more than a year. Mr. Gao Chaojun, Mr. Xu Qiyang and Mr. Huang Shunkun are still being held there.

“Secret Trials in China: A Problem with the System, or with the CCP? ”