(Clearwisdom.net) Today's news from China includes incidents of persecution that took place in ten cities or counties in seven provinces. According to this report, eight practitioner were subjected to mistreatment during their detention and at least five practitioners were illegally arrested. 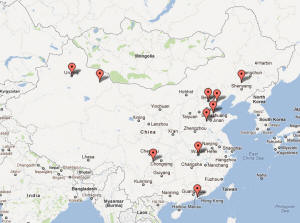 Ms. Zhao Jun from Zigong is retired from the Tongde Construction Company in Xichang. She was taken to the Xiaomiao Detention Center in Xichang on November 30, 2010. In 2011, she was sentenced to a three-year prison term by the Xichang Court.

Ms. Li Xianghong, 48, was a teacher at the Xinjing Technology Institute. She was arrested by the Wulumuqi 610 Office while distributing Falun Gong materials in March 2002. She was detained in the Liudaowan Detention Center in Wulumuqi. Later on she was sentenced to 11 years and 6 months in prison. In February 2004, she was transferred to the Xinjiang Second Prison.

Ms. Li planned to escape the prison in March 2007. She was taken back after being found by the guards. She was confined and inhumanly tortured in a fully enclosed small cell. She was handcuffed and locked to a ground ring all day long, with the TV playing programs that defamed Falun Dafa from morning to night. She went on a hunger strike to protest the persecution. The guards brutally force-fed her.

Ms. Wei Shuyan, 47, lives in Hami, Xinjiang. She was sent to a forced labor camp in 2002 and managed to leave in the fall of 2004. In March 2005, Ms. Wei was arrested by the Hami Police Department and later sentenced to five years in prison. She was sent to the Xinjiang Second Prison in February 2006. She refused to give up practicing Falun Dafa. In April 2007, the prison extended her term of three years.

Ms. Li Shulan lives in Tulou Village, Machikou Town, Changping District, Beijing. She was arrested by officers from the Machikou Police Station in 2000 and later detained in a forced labor camp for two years, where she was tortured. The guards fed her six pills of an unknown drug, which caused her to become mute and her mental abilities to deteriorate. She now cannot take care of herself.

On the afternoon of December 16, 2011, Ms. Zhou Zhimei from the Dongchangfu District in Liaocheng was arrested for talking to people about Falun Gong. She is being detained in the Yuezhuang Brainwashing Center at Changrun Road.

Mr. Xu Weimin was scheduled to be released on December 18, 2011. That morning when his family members arrived at the detention center, they were told that Mr. Xu had been sent to a brainwashing center by the Shenzhen 610 Office and the Shatou Neighborhood Committee.

Ms. Zhang Chunming from Zhangpeiyuan Village, Xuyuanzi Township, Qingyun, was arrested by the Qingyun police on December 15, 2011. Her whereabouts are currently unknown.

Ms. Li Yaping is being held in the Hebei Women's Forced Labor Camp. She resisted the persecution by refusing to wear the camp uniform or to follow the guards' orders. The guards then treated her even worse. They stripped off her clothes. Wearing only a bra and underpants, she was forced to stand outside in cold weather. Her term was also extended by three months.