(Clearwisdom.net) Today's News from China includes incidents of persecution that took place in 15 cities or counties in 8 provinces. According to this report, 29 practitioners were subjected to mistreatment during their detention, and at least 20 practitioners were illegally arrested. 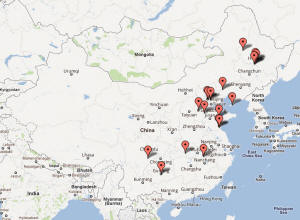 Mr. Zhao Yu-an, 48-years-old, is owner of a computer company. Mr. Zhao and his wife Ms. Li Xuelian were illegally arrested on the morning of September 20, 2011 on their return home from work. Lü Zhenhua and Ma Jianfeng from the Acheng District Domestic Security Division and others broke into and ransacked Mr. Zhao's company. The police confiscated items from the company and filled up a truck. They also stole cash and bank cards. At the end, they forced Mr. Zhao's 73-year-old illiterate mother to sign the list of confiscated items.

Police officer Wang Peng from the Guiyang Police Department arrested Mr. Ma Xiaoshun on November 3, 2011 because he talked to people about Falun Gong, and detained him at Fenggang County Detention Center. Mr. Ma went on a hunger strike to protest the persecution. He had symptoms of high blood pressure and insufficient blood supply to his internal organs. He is now in the Fenggang County Hospital. Mr. Ma's family asked the authorities to release him, which was denied. The Fenggang Procuratorate filed Mr. Ma's case at the county court on November 8, 2011.

Police from the Hubin Police Station arrested Ms. Zhu Lijuan on November 18, 2011. They also confiscated her computer, printer and cash on which were written messages about Falun Gong.

Zhu Lijuan is in her 50s, lives at the north side of Nenjiang Park, Shalong District. She manages a convenience store.

On November 18, Li Ying dispatched two persons to Ms. Wang's home. They tried to have Ms. Wang go to the administration office to sign some documents. Ms. Wang refused. Li Ying then called the leaders at Ms. Wang's husband's workplace in attempt to force Ms. Wang to go.

Zhang Yuanhua from the Zhijiang Domestic Security Division, Dong Tao, and the head of Security Section of Zhijiang Electricity Bureau Zhou Hanbing arrested Mr. Lin Hai at his workplace on the afternoon of November 17, 2011. Mr. Lin was taken to Wuhan Brainwashing Center.

More than ten practitioners in Shuangcheng were arrested on November 13, 2011. Among them those who gave their names to the authorities were detained for fifteen days. Mr. Fu Wenqing, Mr. Wan Yunlong, Mr. Wang Wenli, Mr. Zou and another unknown practitioner had been detained until December 14.

Ms. Wen Yuhong from Huairou was arrested on November 17, 2011. Her whereabouts is unknown.

Back in 2004, Sun the vice head of Huangkan Police Station and several people from the Huangkan 610 Office arrested Ms. Wen, and imprisoned her at Huairou Women's Prison for four years. Ms. Wen was tortured and both her legs were paralyzed.

Police arrested Ms. Zhao Zhimin and detained her at Changfeng Police Station on the evening of November 17, 2011. On the afternoon of November 18, Ms. Zhao was transferred to Nanhuochang Detention Center.

Police from the Hengshui Police Department arrested Mr. Meng Xianqun from Zaoqiang County at noon on November 19, 2011. The police confiscated his computer and printer.

Mr. Liu Changqing from the Shigoudong Village, Dadian Town, Junan County was arrested on the morning of November 17, 2011. Police ransacked his home and confiscated Falun Dafa books, a computer, a printer and a CD burner.

Mr. Liu Changqing is in his 40s. His wife passed away three years ago. Their daughter is in high school and their son is in elementary school.

Ms. Wang Rurong from the third team, Hongyang Village, Yangwan Xiang was reported to the authorities and arrested while talking to people about Falun Gong on the street on November 16, 2011. Ms. Wang is detained at the Shizhushan Detention Center in Leshan.

On the evening they went to Mr. Li Chunfu's home to harass him.

Police from the Wuxue 610 Office, State Security and the police station arrested several practitioners on March 1, 2011. Some of these practitioners were taken to Hubei Provincial Law Education Center (i.e. Banqiao Brainwashing Center).