(Clearwisdom.net) Wang Xuehao, head of the Department of Liver Surgery at the Jiangsu Province People's Hospital, has performed 14 live-donor liver transplants in recent years. Sources of the livers are unidentified.

Wang Xuehao, male, 69 (born in 1942), an academician at the Chinese Academy of Engineering, currently heads the Department of Liver Surgery at the Jiangsu Province People's Hospital. Reports indicate that Wang Xuehao has retired, but still participates in two surgeries per week.

Zhou Jie, since 2004, has led the department staff in carrying out liver transplantation. To date, the total number of cases has reached 200. In July 2010, Zhou Jie led department personnel to carry out living-donor liver transplantation, and Nanfang Hospital has become one of the few transplant centers in China that has mastered the technology. Zhou Jie, the first to write about the technology, has published more than 60 papers, edited and published a book, and obtained eight projects supported by Chinese National Natural Science Foundation and Guangdong Province Scientific and Technological Projects Foundation. The funding received totals nearly one million yuan. It is said that his academic status and live transplants he performs are at the forefront of liver and gallbladder surgery in China. However, because Zhou Jie has done so much live-donor liver transplantation, the sources of the living donors used needs further investigation.

Investigation Lead: A liver transplant surgery is done in No. 181 Hospital in Guilin--Organ Source is unidentified

Between 2002 and 2003, thousands of Falun Gong practitioners had their organs harvested across China while they were still alive, for organ transplantation. The liver source for Mo Liangxiu's liver transplant surgery is unidentified, and needs further investigation.

Sources of organs for transplantation at the Kidney Transplant Center in No. 281 Hospital in Qinhuangdao remain unidentified

Qinhuangdao Evening published an article entitled “Kidney Transplant Center of No. 281 Hospital of the Chinese PLA” on December 18, 2009. It said that from 1987 to today, 400 kidney transplant surgeries have been performed. In 2009 alone, the hospital did 65 kidney transplants (about 1.3 cases per week, but the sources of donors were unidentified). The following is a scanned picture of the Qinhuangdao Evening. 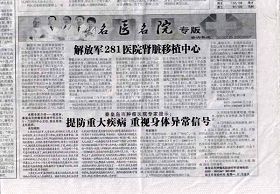 Submitted by Bai Yumei and Han Xiaofeng on December 18, 2009