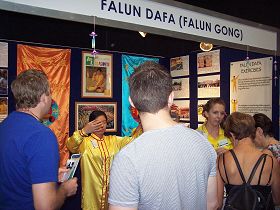 A lady who visited the booth had just finished a tour of Asia and returned to Australia recently. She said that in Malaysia she heard of Falun Dafa by coincidence. She was lost and asked a Falun Gong practitioner for directions. The kindhearted practitioner took her home, offered her tea, and told her about Falun Gong. The lady was delighted to see Falun Gong practitioners at the expo. She believed that all these meetings were due to a predestined relationship. 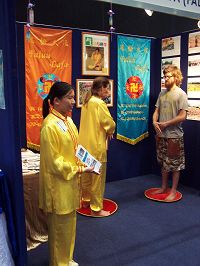 A man from Byron Bay, Queensland, learns Falun Gong in the expo

A man from Byron Bay, Queensland, got a copy of Zhuan Falun from someone. After reading it, he came to Golden Coast to visit his parents. After seeing the Falun Gong booth at the expo, he learned the exercises from practitioners and said he felt energy in his hands and body.

Many people expressed their interest in Falun Dafa and chatted with practitioners.

A young lady who practiced yoga said she felt a strong energy field in the Falun Gong booth. She said she would learn and practice Falun Gong soon at a group practice site nearby.

A man who was a Tibetan monk for 26 years listened carefully to a practitioner’s explanation to understand Falun Gong’s principles.

Before the expo ended, practitioners distributed paper lotus flowers to staff members of other booths. One of them hugged a practitioner and was grateful to Falun Gong for the positive energy.

During the three-day expo, nearly one thousand people accepted Falun Gong flyers to learn about the practice.