Mr. Qiu Qinghua Passed Away after Suffering in Prison (Photos)

(Clearwisdom.net) Falun Gong practitioner Mr. Qiu Qinghua was a meat vendor who worked in the North Market of Liaozhong County in Liaoning Province. Because he remained steadfast in his belief, he was repeatedly persecuted by the Liaozhong 610 Office and the Domestic Security police. He was sent to a forced labor camp in 2002 and was sentenced to four years in prison in 2008. After he was tortured so severely that he was in danger of dying, the prison officials blackmailed his family and released him in August 2011. Just a few months later, on October 12, 2011, he passed away.

A loafer became a good person after practicing Falun Dafa

Before practicing Falun Dafa, Mr. Qiu used to be a loafer and often fought with others. After he started practicing in 1998, he followed the principles of Truthfulness-Compassion-Forbearance and changed his bad behaviors. People in the same business said, "Qiu Qinghua has changed and is now a person of good character. It's really remarkable to see such a dramatic change!"

There was a sewer in the market where Qiu worked that often became blocked when it rained. Qiu would go down and clean it out with his hands. Whenever he received counterfeit money when selling meat, he would destroy it and would not try to use it again to cheat others.

When Mr. Qiu went to Beijing to appeal on behalf of Falun Dafa in October 1999, he was brutally beaten and detained in a Beijing prison with death row prisoners. He was shocked with six electric batons at the same time during his detention.

In 2002, the police posted slogans on the east wall of North Market that slandered Falun Dafa and its founder. Mr. Qiu wiped the slanderous messages out several times. He was eventually caught and arrested. He was sentenced to three years of forced labor and sent to Zhangshi Forced Labor Camp in Shenyang City.

In January 2006, Mr. Qiu and Mr. Zheng Shoujun (who died in 2009 due to the persecution) were arrested in Panjiabao Township, Liaozhong County. Mr. Qiu was taken to Zhangshi Brainwashing Center by Li Wei, the head of the Liaozhong County Domestic Security Division, and Feng Dongchang from the 610 Office. Mr. Qiu held a hunger strike to protest the persecution. Feng Dongchang poured a glass of cold water into his ear, which became infected and eventually led to severe meningitis. He was unable to recognize his family and was on the verge of death. He was released and soon fully recovered through practicing the Falun Gong exercises.

In July 2008, Mr. Qiu was taken into custody by Li Wei, Xu Quangang, Li Guosen, and Xu Liang from the Domestic Security Division. They threatened him, ordering him to give up the practice of Falun Gong or else they would send him to jail. Qiu said, "Why would I stop practicing Falun Gong since it made me a better person?" He was sentenced to four years and sent to Dabai Prison in Shenyang City. After suffering for two and half years in jail, he showed symptoms of diabetes and tuberculosis. The prison officials were afraid of being held accountable for his death, so after division head Han extorted 10,000 yuan from his family, he was released in August 2011.

Passes away, leaving a wife and children 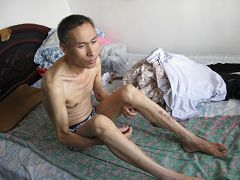 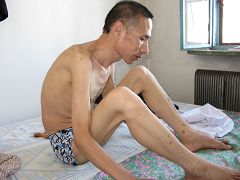 Photos of an emaciated Mr. Qiu after his release

Mr. Qiu was emaciated and extremely weak after he was released. He struggled to live for two months, but died at 5:30 p.m. on October 12, 2011. His wife and two children are now on their own.