(Clearwisdom.net) On January 15, 2012, several days before the Chinese New Year, practitioners from Yilan County gathered in Luodong Sports Park and did the Falun Dafa exercises together. They had a group photo taken and sincerely wished Teacher a happy Chinese New Year. 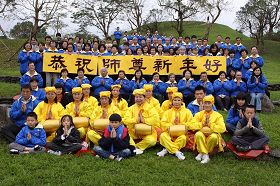 Wholeheartedly Grateful to Teacher after Regaining Healthy Bodies and Minds

The air was crisp after an afternoon shower. These practitioners, who have benefited so much from practicing Truthfulness-Compassion-Forbearance, felt their hearts glow. As the Chinese New Year approaches, they feel especially grateful for Teacher’s grace.

Falun Dafa is spread mainly by word of mouth. Many people became practitioners after witnessing family members regain their health due to the practice. Mr. Chen is a dentist. He used to have chronic depression and insomnia. They both disappeared after he practiced Falun Dafa. His wife, Ms. Zhuo, is a nurse. She began to practice in 1999. Mr. Chen’s father is a businessman and had practiced many kinds of qigong after he retired. After seeing Mr. Chen benefit from the practice, his father, who was 70 years old at the time, learned Falun Dafa as well and soon his heart problems were healed.

Mr. Zeng is a retired teacher from a vocational high school. He and his entire family practice Falun Dafa. His wife, Ms. Yu, had severe migraines. Her symptoms were aggravated by even a tiny sound. Her migraines improved significantly a week after she started to practice Falun Gong and her problems with her autonomic nervous system were gone. She never used to attend her husband’s school activities but now she attends most of them. Ms. Yu’s two sisters and her daughter have also been practiticing for many years.

Mr. Zhang began to practice Falun Dafa in 1999 after his brother-in-law told him about the practice. Before he started, Mr. Zhang frequently felt generally unwell and had a hard time breathing. When the symptoms got worse, he felt as if he were going to die. He went to different hospitals, but they could not find anything wrong with him. Three months after he began the practice, he was completely healthy. His wife and two children all became practitioners.