Shuangcheng Police Unlawfully Arrest Ten Falun Gong Practitioners for “Disturbing the Peace,” Despite the Fact That the Practitioners Were at Home

(Clearwisdom.net) Police officers from Shuangcheng, Heilongjiang Province, illegally arrested more than ten Falun Gong practitioners and ransacked their homes between December 7 and 12, 2011. In one day alone, in what seems to have been a stepped up attack on the peaceful Falun Gong, officers from the Heilongjiang Police Department, the Harbin Police Department, and the Shuangcheng Domestic Security Division arrested 56 practitioners on November 13, 2011.

At two o'clock in the afternoon on December 7, 2011, five or six officers from the Third Division of Shuangcheng Patrol Police Department went to the home of Mr. Liu Qingyi in Hongwei Village, Handian Town, and arrested him. The police took his pictures of Falun Gong's founder, Mr. Li Hongzhi. They also took away some soft furnishings. The police went to Ms. Liu Qingxiang's home and arrested her and would not let her put on a warm coat before talking her to the cold detention center. The police went to ransack two other practitioners' homes to see what goods they could confiscate. Both homes were locked, so the police were unsuccessful. Finally, they went to another practitioner's home and took many personal items. Her husband, a non-practitioner, was also taken away, but he was released on December 8, 2011, because he did not practice Falun Dafa.

Twelve officers went to the home of Mr. Li Shuqi in Lianfeng Village, Tuanjie Township, on December 7, 2011, at 7:40 p.m. They claimed they were from the Shuangcheng Police Department but would not present any identification. Mr. Li, who is 70 years old; his oldest daughter-in-law; his second daughter-in-law, his second son; and five people from his daughter's family, as well as a visitor, were forcibly taken to the Shuangcheng Detention Center. Two officers went back to arrest another practitioner and found only an elderly woman in the home. The police also ransacked his home and rummaged throughout the house. It was winter and very cold at that time. The practitioners who were arrested only had on thin clothes. Some were still wearing pajamas. The next day, a female guard whose last name is Ai from the Shuangcheng Detention Center ordered the arrested practitioners to call their families to pay 1000 yuan in fines for “disturbing CCP orders” and 500 yuan each for two weeks' boarding expenses in the jail. (How can you disturb the public order when you are sitting at home?) The patrol police coerced their families to pay the fine and forced them to sign a document, saying the practitioners would not sue the police or appeal after being released. The patrol police also forced the arrested practitioners' families to pay the 480-yuan boarding fee for each practitioner.

Ma Wanjun, head of Youlian Village, Shuangcheng Town, took officers from the Chengjiao Police Station to ransack the home of Mr. Li Zhenwen on December 8, 2011. They took away all Falun Dafa books and pictures of Master Li. Mr. Li Peng was arrested and taken to the detention center. At noon on December 12, 2011, officers from the Chengjiao Police Station went to Mr. Li Zhenwen's home again and asked his wife where he was. They smashed the New Tang Dynasty TV satellite dish, which broadcasts news from all over the world and shows documentaries highlighting the real Chinese culture prior to communism.

Later that same day, officers from the Chengzhen Police Station rushed into the home of Xiao Fu from the Wanjia Group and seized Mr. Wang Xingyu, Mr. Zheng Wenping, and Ms. Zhao Shufang. They confiscated Falun Dafa books, pictures of Master Li, and some lotus lamps. The practitioners were taken to the Shuangcheng Detention Center. Mr. Wang Xingyu's wife, Yan Fen, is being unlawfully detained in the Heilongjiang Women's Prison. His daughter was just released last year. His son is working out of town and there is no one to take care of his grandson, who is now on his own at home.

At 3 p.m. on December 9, 2011, a group of plainclothes police in a vehicle without a license broke into the home of Ms. Zhang Shuxia in Hongwei Village, Handian Town. They broke in to arrest Ms. Zhang, but she was not at home, so they were unsuccessful.

At 9 a.m. on December 12, 2011, the Shuangcheng police and seven or eight officers from the Jincheng Township Police Station rushed into the home of Mr. Zhang Zhongtian in Dengjiatun Village, Jincheng Township, and seized Mr. Zhang, who is about 70. The police also took Falun Dafa books, a computer, etc.

On November 13, 2011, 56 Falun Gong practitioners from Harbin and Shuangcheng were arrested. About 50 of them had been sharing their experiences cultivating in Dafa at a fellow practitioner's home in a building in the Shuangcheng Municipal Construction Bureau. On the afternoon of December 13, 2011, the police ransacked Ms. Luo Yanjie's home and arrested her son, Fan Wentuo, as well as Ms. Jiang Xiaoyan and Lao Fang, who had gone to to visit her son. At 3 or 4 in the afternoon, the police also arrested Mr. Kang Changjiang and Ms. Wang Yali, who did not attend the experience sharing. When the police ransacked Mr. Kang's home that night, four practitioners were at his home and the police also illegally arrested them, too. 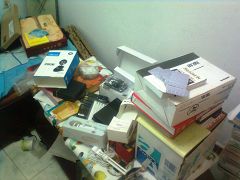 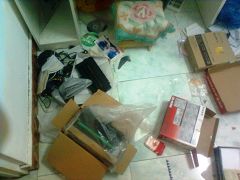 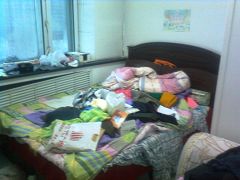 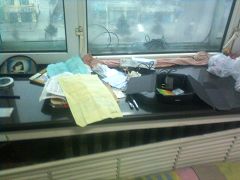 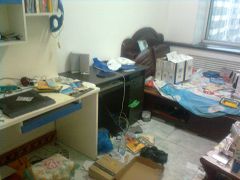 Please refer to the Chinese version for more information about the relevant personnel.