(Clearwisdom.net) Ms. Huang Xiuying is a retired nurse from the Panzhihua Steel Company Hospital. She was arrested on January 10, 2010 for speaking with people about Falun Gong. She was later taken to the Chengdu Women's Prison. On March 3, 2011, she was taken to the Jintang Prison Hospital in Sichuan Province, and 14 days later she lost her sight in both eyes. 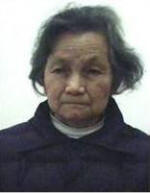 Ms. Huang began practicing Falun Gong in 1997. Soon after that, many of her illnesses disappeared, including heart disease, gastroenteritis, anemia, glaucoma in her right eye, low blood pressure, etc. She was free of illness and felt refreshed. She experienced the goodness of Dafa by following the principles of Truthfulness-Compassion-Forbearance.

The Jiang regime started suppressing Falun Gong on July 20, 1999. On March 3, 2000, Ms. Huang went to Beijing to appeal for the right to practice Falun Gong. She was arrested and detained at the Beijing Office of the Panzhihua Steel Company for four days. She was then taken back to Panzhihua and detained at the Wanyaoshu Detention Center for 30 days. Following that, she was taken to the Dongfeng Brainwashing Center in Dong District and held for 56 days.

In November 2000, officers from the Dong District Police Sub-Bureau, the Dahuadi Police Station and the sub-district office arrested Ms. Huang and ransacked her home. The officers confiscated Falun Gong books and videos. Ms. Huang was taken to the Wanyaoshu Detention Center and detained for 30 days.

In September 2008, a group of officers led by Cui Fuli, chief of the Domestic Security Division of the Renhe District Police Sub-Bureau, broke into Ms. Huang's home and ransacked it. The officers confiscated Falun Gong books, a photo of Falun Gong's Teacher, paper money that has information about Falun Gong written on it, a DVD player, an MP3 and MP4 player, and other personal belongings. Ms. Huang was taken to the Wanyaoshu Detention Center and detained for 30 days. Her husband witnessed the ransacking and was terrified. He was hospitalized and passed away on October 21, 2008.

In February 2009, the Renhe District Police Sub-Bureau called and demanded Ms. Huang to fill out a form. Her son went there instead, fearing that her mother might be arrested. The son was threatened and forced to pay 2,000 yuan to the police.

On June 10, 2009, a group of officers from the Panzhihua 610 Office, the Qingxiangping Police Station and the Dahuadi Police Station led by Cui Fuli, chief of the Domestic Security Division of the Renhe District Police Sub-Bureau, broke into Ms. Huang's home and ransacked it. The officers confiscated many of her personal belongings. Ms. Huang was taken to the Wanyaoshu Detention Center. They were going to detain her for 30 days, but released her, pending trial, when she showed symptoms of high blood pressure.

On November 19, 2009, the Xi District Court in Panzhihua sentenced Ms. Huang to four years in prison. Ms. Huang made an appeal, but the Middle Court upheld the first trial's sentence. Ms. Huang was taken to the Wanyaoshu Detention Center. The center authorities refused to admit her because of her high blood pressure. On January 10, 2010, officers from the Panzhihua 610 Office took Ms. Huang to the Chengdu Women's Prison in Longquanyi District, Chengdu City.

Ms. Huang was incarcerated in the Second Group in the Sixth Ward and was subjected to brainwashing. She could not see clearly after one year. On March 3, 2011, Tian Li, warden of the Sixth Ward, and guard Zhao Hongmei took Ms. Huang to the Jintang Prison Hospital to get medical treatment in both eyes. The guards and the doctors pinned down Ms. Hang and administered eye drops into her eyes, using four different kinds of eye drops that were alternately used every two hours. It resulted in blindness in both eyes after 14 days. The doctor still charged Ms. Huang 865 yuan for the medicine. He also tried to dodge his responsibilities, saying that her blindness was due to her age.

After Ms. Huang returned home, the local Community Committee asked her to report to them, but Ms. Huang refused. Ms. Huang is still blind today.