(Clearwisdom.net) Today's News from China includes incidents of persecution that took place in 12 cities or counties and in eight provinces. In this report, 10 practitioners were subjected to mistreatment during their detention and at least 14 practitioners were illegally arrested. 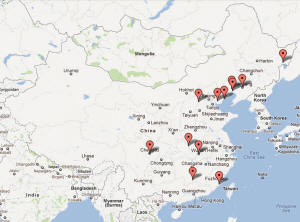 On January 1, 2012, Mr. Li Feng was arrested by officers from the Jinzhou City 610 Office at his parents' home. The officers confiscated a computer, a photo of the founder of Falun Gong, and Falun Gong books. Mr. Li is being detained at the Jinzhou City Detention Center.

Several practitioners were arrested on December 19, 2011. Among them, Mr. Zhong Shifeng and Ms. Wu Guiyun were released. Ms. Zhao Guiping is still being detained at the Jinzhou City Detention Center.

Mr. Lin Wenhui was taken to a forced labor camp twice. He suffered from liver ascites as a result of the persecution in the camp. The camp authorities didn't want to be held responsible, and released Mr. Lin on medical parole.

On December 15, 2011, Ms. Liu Hui was arrested and her home was ransacked. Her current whereabouts are unknown.

Ms. Wang Sulian and Ms. Qi Junling are being held at the Tangshan Women's Forced Labor Camp. Ms. Wang was often beaten because she insisted on doing the Falun Gong exercises. Ms. Qi was not released after she finished her term. She went on a hunger strike to protest the unlawful practice and was force-fed every day.

On April 24, 2002, Mr. He Jiang was arrested by officers Meng Qingqi and Du Yongshan from the Mishan City Police Department. He was sentenced to 11 years in prison and was imprisoned in the Jianzishan Prison in Mudanjiang City. On December 19, 2011, he was released after nine years and eight months of imprisonment.

On the afternoon of December 31, 2011, Ms. Lu Shufang, 68, from Yanfen Community, Tiexi District, was reported by Kang Changqing, head of the Yanfen Community Sub-District Office, while handing out calendars that contained truth-clarifying information. Several officers including Lu Shengkui from the Yanfen Police Station arrested Ms. Lu and took her to the station, and then to the Tiexi District Police Sub-Bureau. The officers later took Ms. Lu to a detention center. The center authorities refused to admit her as she failed the physical exam. Ms. Lu was released the next day.

On January 1, 2012, Ms. Lei Rirao was arrested while handing out truth-clarification materials on the street. She is being detained at the Chenzhou City Detention Center.

On the afternoon of January 4, 2012, Ms. Han Cuiying, Ms. Huang Shouxi, Ms. Hu, Ms. Liu, and Ms. Yue were reported while they were distributing informational materials in Shancun Village, Wangji Community, Xinzhou District. They were arrested by officers from the Wangji Police Station and later taken to the Wuhan Women's No. 1 Detention Center.