(Clearwisdom.net) Shen Yun Performing Arts concluded its five-show run in the Greater Los Angeles area, the epicenter of the entertainment industry and home to Hollywood, on Saturday, January 14, 2012, receiving much praise from celebrities, artists, and the general public. This was Shen Yun’s eighth visit to Los Angeles since 2006.

Shen Yun performed two shows at the Segerstrom Center for the Arts in Orange County, California, on January 11-12, followed by three performances at the Dorothy Chandler Pavilion in Los Angeles on January 13-14. All five performances were sold out.

Over 11,000 people attended the Shen Yun performances in the Los Angeles area. Many audience members indicated that they looked forward to seeing Shen Yun return to the region next year. Several also asked for advance notice to make sure that they could secure the much-sought-after tickets for their family and friends next time around.

Renowned Actress: “I’m sure everyone around the world will want to see this show” 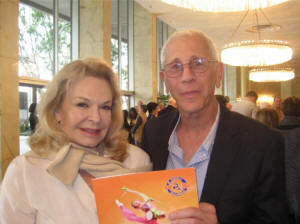 Renowned actress Carole Wells, whose decades-long career includes many accomplishments in television, movies and publishing, found Shen Yun inspiring. “It’s so inspiring, because besides the visual beauty, the story is good—because it does tell the sad side of what’s happened in China, along with the happy side,” she said after the Saturday matinee, according to The Epoch Times. Along with a dazzling display of historical and cultural diversity of China, Shen Yun presents several stories set in contemporary China, highlighting the ongoing suppression of Falun Dafa, a spiritual meditation practice, by the Chinese communist regime.

“It’s very special, and I think everyone should see it, and I’m happy to see so many Chinese people here seeing it,” said Ms. Wells of the production. “I’m sure everyone around the world will want to see this show.” 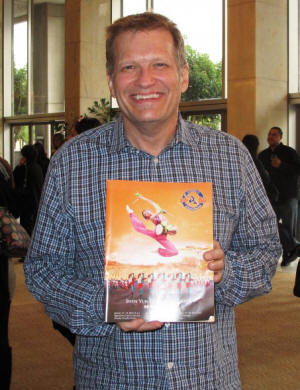 Actor Drew Carey at the Dorothy Chandler Pavilion on January 14, 2012. (Courtesy of The Epoch Times)

“The artistry is really fantastic,” said celebrity comedian and TV star Drew Carey, who attended the Saturday matinee, bringing along eight of his friends, according to The Epoch Times. “Those are spectacular dancers.”

Musician and composer Mr. Richard Leach, who has performed with such music legends as Ray Charles, Elvis Presley and Frank Sinatra, described the Saturday evening performance as “breathtaking,” according to the paper. Noting the “wonderful music” and the “great orchestration,” Mr. Leach was also taken with the vocal soloists featured in the performance. “I liked the singing, the sopranos, the words on the screen [translations of the lyrics sung in Chinese]. Those messages were very profound,” he said.

Mr. Stephen Lenske, a lawyer attending the Friday evening performance, thought “the dancers were magnificent” and the stories presented through the dance “very interesting.” He was also impressed by the “beautiful costumes,” “beautiful backdrops and fantastic music,” noting that “the transitioning between the video [digital backdrop] and the dancers was excellent” and “the precision was absolutely outstanding.” 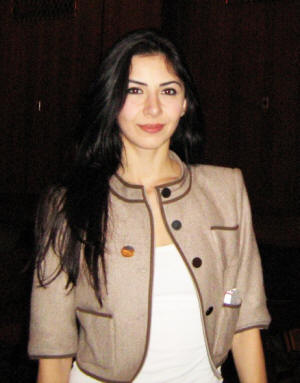 Ms. Victoria Ananyan at the Dorothy Chandler Pavilion on January 14, 2012. (Courtesy of The Epoch Times)

Ms. Victoria Ananyan, a soloist ballerina with San Francisco Ballet, was so taken with Shen Yun on Friday night that she returned to the Dorothy Chandler Pavilion the very next day to see the performance again, reported The Epoch Times. “I got really inspired, and I had to come back and see the show once again,” she said, calling the performance “awesome” and “spectacular.”

“I Started Practicing Falun Dafa Again After Visiting the USA”