(Clearwisdom.net) What would you do if you were faced with a man trying to rob your store armed with a handgun and a bomb? The Hong Kong media recently reported a story about a store clerk who persuaded a man to abort his attempt at armed robbery. Where did the clerk get his courage? This is his story.

A news report on December 26, 2011, on Apple Daily News told of a 41-year-old clerk at a 7-11 store who was faced with an attempt at armed robbery. However, the clerk talked the man into fleeing the scene without following through with his plan. Several other news agencies ran the same story. This news received a lot of attention on the Internet as well. 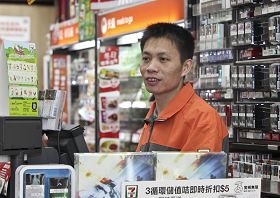 Mr. Kuang Senqia at his workplace

Although the media gave the clerk such nicknames as "Mr. Jiang" and "Jiang Axia” (meaning Superman), his real name is Kuang Senqia. Mr. Kuang has been working at the 7-11 for 11 years. The incident took place at the 118 Queens Blvd location in Hong Kong at 4 a.m. on December 24, 2011. According to Mr. Kuang, his co-worker had just left, leaving Mr. Kuang alone in the store. All of the sudden, a man wearing a black ski-mask and speaking in a Mainland Chinese accent approached the check-out counter. The man revealed his gun and produced a small box, which he claimed was a bomb that he could detonate by remote control. The man demanded that Mr. Kuang give him all the money in the cash register.

Mr. Kuang has confessed that he has never before been faced with a robbery, so when it happened, his mind went blank. "I did not think about my own safety. I only thought about the robber." Mr. Kuang did not take the money out. Instead, he spoke calmly to the robber, a man in his 30s, and tried to reason with him. "I told him, 'Wow. This is a very serious crime. Think carefully. There is very little money in this cash register. Besides, there is a camera videotaping us. It will be difficult for you to walk away from this. Think carefully about it. Don't do such a foolish thing. Hurry up and leave.' I tried to talk him out of it.”

“The man was taken by surprise. He froze and listened to me quietly. It seemed as though he actually listened.” Then a customer walked into the store. Mr. Kuang told the would-be robber, “Someone has come in. Be good. Leave quickly.” The man looked as though he had suddenly awakened. He picked up his handgun and supposed bomb and ran out of the store. The entire incident lasted only a few minutes.

Heaven Will Ultimately Reward Good Deeds and Punish Bad Ones

People were astonished by Mr. Kuang's courage. Some media claimed that he was a Buddhist. About this claim, Mr. Kuang solemnly clarified that he is not a Buddhist, but a Falun Gong practitioner. He believes that Heaven will ultimately reward good deeds and punish bad ones.

Mr. Kuang said, "As a Falun Gong practitioner, I cannot stand there and watch bad deeds take place. I should be responsible to society. Our Teacher teaches us to follow Falun Gong's principles of Truthfulness-Compassion-Tolerance and to become a better person. I hope more people will become better. I didn't want to see him commit the crime of robbery. I thought of the best for him. I did not want him to do such a foolish thing. Repent and salvation is at hand." 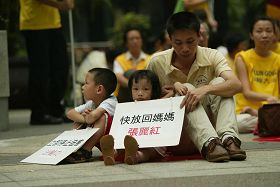 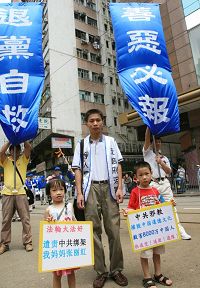 Several years ago, Mr. Kuang and his two children attended a public appeal to have his wife, Zhang Lihong, released from prison after she was incarcerated for practicing Falun Gong

When asked how he began practicing Falun Gong, Mr. Kuang says that his cousin in China introduced Falun Gong to him in 1996. He has benefited from the practice, which teaches him to cultivate his morality. When the Chinese Communist Party (CCP) began its persecution of Falun Gong in 1999, his wife, from Shantou, Guangdong Province, was illegally sentenced to three years in prison for practicing Falun Gong. He appealed for her release in Hong Kong, saying, "I know Falun Gong is good. After all, I practice Falun Gong as well. Since my innocent wife was arrested, my two children have been without their mother. I will do my best to rescue her." She was ultimately released.

Mr. Kuang tries to be a good person in his daily life. His company is very pleased with his work performance and recently gave him a promotion. It is his New Year's wish that everybody will step forward and demand justice for Falun Gong. 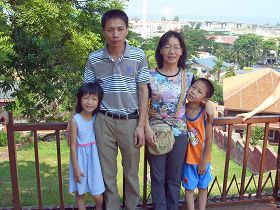 Mr. Kuang Senqia; his wife, Zhang Lihong; and his two children in Malaysia after his wife's release

Mr. Kuang impressed the Hong Kong police and residents with his courage. A Hong Kong resident gave him a thumbs up, "He was very clearheaded. He did not lose his composure in the face of danger. He must have had a lot of work experience. A young man with limited experience might not have had the courage."

A Chinese Tourist: May the Righteous Energy Keep Expanding

A tourist from Hainan Province, China, commented, "I think he is very courageous and has a strong sense of justice. I might not have had his courage and wisdom. If I faced the same situation, I might want to flee first."

The female tourist added that the level of morality is continuing to decline. People in Foshan, Guangdong, watched a toddler get repeatedly run over by cars, yet no one stopped to offer a hand. She saw a beacon of hope in Mr. Kuang's act of valor.

She commented, "What he did was righteous. He gave us righteous energy. I hope there will be more people like him in society. I hope that everyone will become more noble and courageous, so that the righteous energy may keep expanding. If everyone were to begin behaving like this, then I think our society would stabilize."

“Officers from the Domestic Security Division of Chifeng, Inner Mongolia, Continuously Harass Practitioners, Harming Others as Well as Themselves”