(Clearwisdom.net) Today's news from China includes incidents of persecution that took place in 14 cities or counties in 10 provinces. In this report, 7 practitioners were subjected to mistreatment during their detention and at least 10 practitioners were illegally arrested. 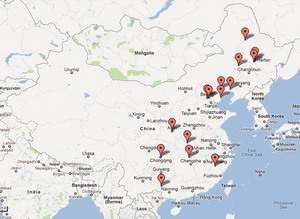 On December 28, 2011, officers from the Handian Town Police Station rushed into Ms. Li Yumei's retail store, smashing the windows and forcibly arresting her. Her employee was also taken to the police station, and was so terrified that he had a heart attack. He was released. The police stole from Ms. Li's store, ten calendars, dozens of DVDs and approximately 5,000 yuan in cash. Ms. Li is being detained in the Shuangcheng Detention Center.

Ms. Chang Meijie lives in Nanlizhuang Village, Liushouying Town, Funing. While talking with people about Falun Gong, on December 30, 2011, she was reported to the police. Officers from the Liushouying Police Station came and took her into custody. Afterwards officers from the Funing 610 Office and Public Security Bureau ransacked her home. They did not find anything. Ms. Chang is being detained in the Funing Police Department.

Ms. Zhu Peilin, Ms. Chen Wenying and Ms. Hu Mingzhen worked in the Xiangyang Arsenal Material Supply Company. On the morning of January 1, 2012, they were reported to police while they distributed Shen Yun DVDs, in Shipu, Fancheng District. Officers from the Shipu Police Station arrested them all. That night, the practitioners were taken to the Xiangyang Administration Detention Center.

Since December 2011, Liu Jingkui and others from the Foyedong Township Police Station in Lingyuan, have gone to Falun Gong practitioners' homes many times and harassed and threatened the practitioners. So far, officers have extorted 40,000 yuan from 12 practitioners. Thirteen practitioners have been forced to leave their homes to avoid further persecution.

Mr. Pu Hongpeng has had to stay away from his home for a long time. However, he was arrested by the Xian police on November 30, 2011. The police refused to allow his family to visit him.

Ms. Li Chunlian, in her 50s, was an outstanding teacher in Dingxing County, Baoding, Hebei Province. She was reported to police while distributing Falun Gong materials in Fengtai District, Beijing, on May 14, 2011. She was sentenced to a two-year term at a forced labor camp. She is being detained in the Tiantanghe Forced Labor Camp in Daxing.

Ms. Li Chunlian was fired from her post by the Dingxing Education Bureau in 2000. She was detained in the Dingxing Detention Center for more than three months. During the detention, the authorities handcuffed her. They also struck and kicked her, and pulled out some of her hair.

Ms. Li's husband Mr. Wang Xian was arrested in 2002. He was detained in the Liyuzhuang Brainwashing Center, where he was treated with violence, being kicked and struck. He was also fined. The guards demanded he write the three statements to give up practicing Falun Gong. The couple was often harassed afterwards. They were forced to become homeless, and do labor work for a living.

Mr. Xing Defu from Mishan, Heilongjiang Province was reported to police while he went to Wulan Village, Hanguerhe Town, Molidawa Flag, Inner Mongolia, to distribute Falun Gong materials. Officers from the Hanguerhe Police Station took him away. Mr. Xing was sentenced to 15 months in a forced labor camp. He is being detained in the Second Division of Hailar Forced Labor Camp. Mr. Sun Weiguo, who was arrested with Mr. Xing at the same time, is detained in the First Division.

Ms. Ma Shuzhen, 61 years old, went to Fufeng Village, Mingshan Town, Nan County to distribute 2012 calendars on December 31, 2011. She was reported to police by Wu Weiping, party secretary of Fufeng Village. Officers from the Mingshan Police Station arrested her. She was taken to the Nan County Detention Center that very night.

Mr. Li Feng was taken away from his parents' home by the Jingzhou police on the afternoon of January 1, 2012. The police also took, from his house, a computer, Master Li's photos and Falun Dafa books.

Mr. Xu Lixin lives in Houqingtun, Yuejin Village, Yangjing Township, Tongyu County. He was persecuted by police many times. In 2004, he was arrested by Guo Zhengyi, Chief of the Yangjing Township Police Station and policeman Liu Wei. He was kept in the detention center for more than one month. During the detention, the deputy chief and two guards beat Mr. Xu Lixin. They handcuffed him and hung him by the wrists.

Five or six policemen broke into the home of Mr. Li Xuejun on January 1, 2012. They forcibly arrested Mr. Li and took away Falun Dafa materials, money and other property.

On December 27, 2011, Mr. Liang Tian talked to students in two classes in Bainan Middle School in Napo County. He was reported to police by the principal Lu Zhang. Officers from the Bainan Frontier Police Station went to ransack Mr. Liang's home on December 30, 2011. Mr. Liang was taken to the police station then released at about 10 p.m. that night.

On the afternoon of December 31, 2011, the chief of the Nanpo County Domestic Security Division and Ren Yuhua, d,irector of the 610 Office went to Mr. Liang's home and harassed him. They threatened him, demanding that he turn in the USB drive he used in class and Dafa books, otherwise he would be sent to a forced labor camp for two years.

Mr. Cheng Zhongzhong, in his 60s, is a retired employee of the Changshou District Nitrogen Fertilizer Plant. He has been missing since November 20, 2011. It has been over a month since his whereabouts were known by anyone.