(Clearwisdom.net) “Jin-Long-Yu” is a brand of cooking oil commonly seen in grocery stores and supermarkets in China. People barely notice the small tag hanging around the bottle's neck, and it's more unlikely that they would know that the knots were tied manually by inmates and Falun Gong practitioners in Shanghai Women’s Prison. 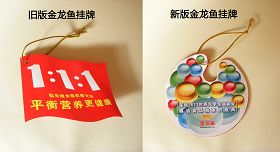 Tying knots for “Jin-Long-Yu” tags is a long-term forced labor that brings profits to the Fifth Division of Shanghai Women’s Prison. Over the years, the target quota for each person went from tying 300 knots an hour to 650, which is equal to 5200 knots every day based on eight working hours a day. The strings are coarse, so the skin on the knot tier's fingers peels off after rubbing the strings repeatedly. This is especially true in winter time, when it’s cold and dry. After tying knots for several months in a row, the fingers become calloused, peel, become calloused again, and peel again. To finish the quota, and moreover to “perform well” for term reduction, some inmates are forced to tie as many as 10,000 knots a day. Every pair of hands is rough, deformed, and cracked. In addition, long-term threading and knotting harms one’s vision tremendously.

Everyone detained at the prison is required to get up at 6 a.m. and begin doing forced labor as soon as they finish brushing their teeth and washing their faces. There are two bathroom breaks in the morning, but many people do not use them for fear of not being able to finish their quota. Lunchtime is at noon, but many cannot put down their work until the food is on the table. They normally finish lunch in 5 to 10 minutes. After dinner, they often work till 6 p.m., unless they have to work overtime. Several elderly Falun Gong practitioners had to work till 10 or 11 p.m., which caused them to have high blood pressure and be extremely weak.

Even with such intense work, the prison authorities still monitor everyone’s “performance” through surveillance cameras. They often yell at those that they think are “lazy” and urge everybody to rest less and work more. This is especially true of Zhou Da, deputy division head in charge of labor. Zhou once dressed down everybody during the monthly evaluation meeting that people shouldn’t be setting tables and waiting for their food before mealtime. Actually, people just washed their hands a few minutes prior to mealtime.

Prisons are an important tool of the CCP rule. The CCP uses prison to exploit people in the name of law enforcement. The regime makes maximum profits by overloading workers, who are deprived of freedom with long-term intensive physical forced labor for so-called “atonement” despite the harm to the workers' health, and feeds its welfare system to support the exploitation machine’s operation and persecute more people.

“What I Have Gained from Watching Shen Yun Performing Arts”